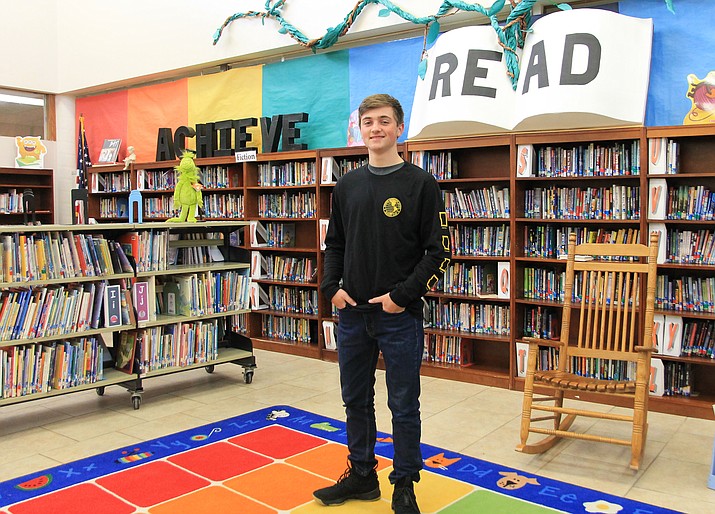 Drew won the WEMS Geography Bee which qualified him to take the GeoBee’s online exam. Based on his exam score, Drew advances to the state geography bee at Arizona State University March 29.

“This is the first year we’ve hosted the Geography Bee at our school and Drew really excelled in the competition,” said Carissa Morrison, principal of Williams Elementary-Middle School. “The questions are challenging and I was impressed with the variety of knowledge he has. We’re super proud to have Drew represent the Falcons in Tucson later this month.”

The National Geographic Society has invited up to 100 of the top-scoring students in each of the 50 states, the District of Columbia, Department of Defense Dependents Schools and U.S. territories to compete in the State GeoBees.

Drew is the first student from WEMS to ever be selected for the Arizona State GeoBee competition.

Drew is an eighth grader at WEMS and recently moved to Williams from Wisconsin. He said he does well in his school work, likes to read and takes a special interest in history and social studies.

“I’ve always loved history, which led me to (read about) other countries,” Drew said.

In addition to preparing for the geography bee by reading, Drew said he has also learned a lot by having his parents quiz him.

He said the questions in the geography bee vary a lot.

“Sometimes the questions are like who are the famous dictators of this country,” he said. “And some of it is history about the countries. It’s also about landforms and stuff like that.”

This year, National Geographic increased the prize money for all State GeoBees. State champions will receive a medal, $1,000 in cash, and other prizes, as well as a trip to Washington, D.C., to represent their state in the National Championship to be held at National Geographic Society headquarters, May 19-22, 2019. Students who come in second and third place will receive cash awards of $300 and $100, respectively.

How would you fare as a National Geographic GeoBee contestant? At the school GeoBees this year, students had to answer questions like these:

At more than 100 miles in length, Long Island is the longest barrier island in which state—Kentucky or New York?

Which state is closer to the Gulf of Mexico—Virginia or Arkansas?

The Magdalena River, the principal river of Colombia, flows through the city of Barranquilla near the Caribbean Sea on which continent?

Which animal famous for its tusk spends most of the winter months under the sea ice in Baffin Bay between Canada and Greenland—emperor penguin or narwhal?

Which country does not include part of the Kalahari Desert—Namibia, Botswana, or Eritrea?

Commercial flower bulb production is an important economic activity in what country just north of Belgium?

Located near the Green Mountains, Montpelier is the capital of which state?

Constructed during the reign of Ivan the Terrible, St. Basil’s Cathedral is located in Moscow in which country?

The Alboran Sea and the Ionian Sea are both part of which larger sea?

The National Geographic Society is an impact-driven global nonprofit organization based in Washington, D.C. Since 1888, National Geographic has been pushing the boundaries of exploration, investing in bold people and transformative ideas to increase understanding of our world and generate solutions for a healthy, more sustainable future for generations to come. Our ultimate vision: a planet in balance. To learn more about the Society and its programs, visit www.nationalgeographic.org.

Visit www.natgeobee.org for more information on the National Geographic GeoBee.

The National competition will be at National Geographic Headquarters in Washington, D.C., on May 19-22 and can be followed at natgeoed.org/experiences.