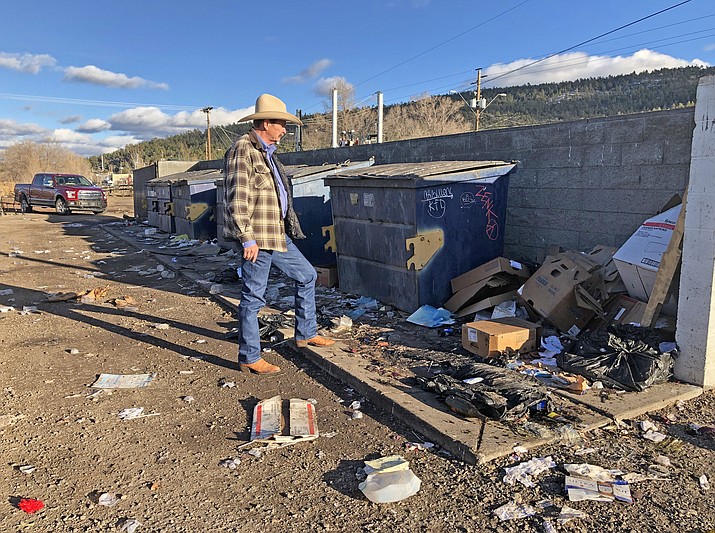 WILLIAMS, Ariz. — In an attempt to curb illegal dumping and overflowing trash cans, the Williams City Council approved funding for an enclosure around city trash receptacles at the parking lot on the corner of Grand Canyon Boulevard and East Railroad Avenue in Williams at the March 14 city council meeting.

The council approved $11,265 for fencing and gates around the receptacles that serve eight businesses in downtown Williams. The location has become popular for illegal dumping and regularly has garbage strewn on the ground.

“I would say 75-80 percent of our guests walk up and down that street between our downtown businesses and the railroad,” said Mayor John Moore. “So there’s no doubt we need to do something with that.”

The sanitation department believes the overflowing trash is mostly from illegal dumping.

“The scattered trash is mainly caused by people other than the businesses filling up the trash containers to the point the businesses don’t have enough space for their trash,” the department said in a staff report. “Between the crows and the wind, this trash ends up everywhere. We have also removed TVs, washer/dryers, mattresses, refrigerators, etc. at this location from illegal dumping.”

Moore said he believes the businesses and residents of Williams also contribute to the scattered garbage and could help maintain city dumpsters better.

“There’s a lot of reasons we’ve got so much trash around there,” Moore said. “According to staff reports, people are coming over and overloading the trash containers. The businesses have no place to put their trash, but also some of our businesses are too lazy to open the lid and put the trash in there and set it on the ground.”

The fence enclosure will have automated drive-thru gates and a 5-foot walk-thru gate for businesses to access.

“I think we need to do this and should do this, but it’s not going to stop our problem of residents out in the county and other places who dump their trash in our trash cans,” Moore said. “All they are going to do is go to another trash bin down the street or up on the hill. So that will solve the problem right here, but Williams has a problem.”