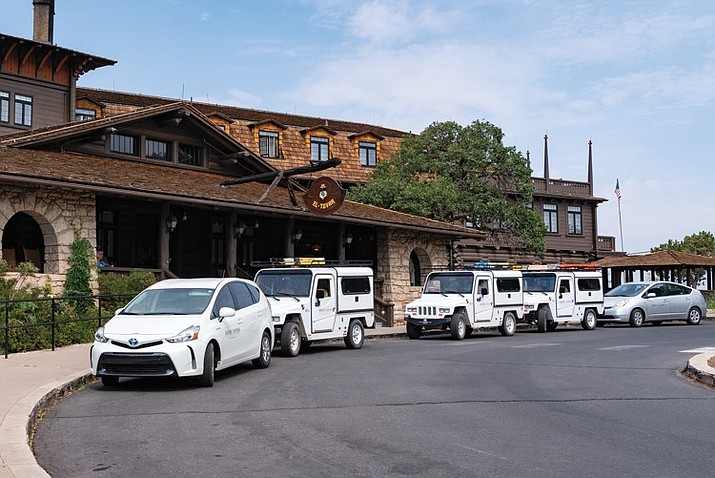 Grand Canyon National Park Lodges has replaced aging vehicles in its fleet with hybrid or all-electric vehicles and plans to add more over the next three years. (Photo courtesy of Xanterra)

Xanterra Travel Collection, which operates a number of lodges and dining establishments in the park under Grand Canyon National Park Lodges, has undertaken a number of green initiatives in the past years. Some projects include reducing food waste by composting and providing healthy fruits and vegetables to the park’s resident mules, and using recycled vegetable oil from the kitchen to fuel the steam locomotive that chugs to the canyon from Williams once a month. When the company embarks on a partial rebuild of Maswik Lodge later this year, the new buildings will be energy efficient, with landscaping and fixtures that conserve water, as well as using recycled materials for construction whenever possible.

The company recently completed a project at its purchasing warehouse, installing a 38-kilowatt solar array to help power the building. David Perkins, Grand Canyon National Park Lodges sustainability director, said the building now gets about 65 percent of its power from the solar photovoltaic array.

“The solar panels and the system in general are outperforming our expectations,” he said.

Perkins said Xanterra is planning to implement more renewable energy projects over the next several years, part of the company’s effort to soften its environmental footprint.

“We strive to operate our business efficiently and that includes looking at sensible renewable energy projects that meet the cultural resources requirements for Grand Canyon National Park,” he said. “We want to do what is right for the park and for Arizona.”

Along with larger-scale solar projects, Xanterra has also made strides on a more individual level by installing electric

vehicle chargers at some of its park hotels, as well as adding all-electric and hybrid service vehicles to its fleet.

Working in partnership with the National Park Service Denver Service Center and BMW, the company installed two dedicated electric vehicle parking spaces and charging stations. A space is also available at the El Tovar upon request.

“We anticipate a growing demand for electric vehicle charging stations at destinations like the Grand Canyon,” Perkins said.

Perkins said in order to aid electric vehicle drivers as they make the trip, Xanterra has also agreed to install the charging stations at the Grand Hotel in Tusayan and the Grand Canyon Railway Hotel in Williams.

“We hope we are encouraging visitors who drive electric vehicles to come to the park,” he said.

In addition to providing space and utilities for visitors driving electric vehicles, the company has also begun using them for daily operations. Its fleet currently contains three all-electric trucks, as well as several hybrid vehicles. Perkins said between 15 and 20 percent of the fleet is hybrid or electric, and more hybrid vehicles are scheduled to go into service in 2019, including a plug-in hybrid Ford Focus Energi.

“As older vehicles are replaced, Xanterra is choosing hybrid and electric replacements,” he said. “We are betting on electric vehicles. This is another effort to soften our footprint as we operate in the park.”