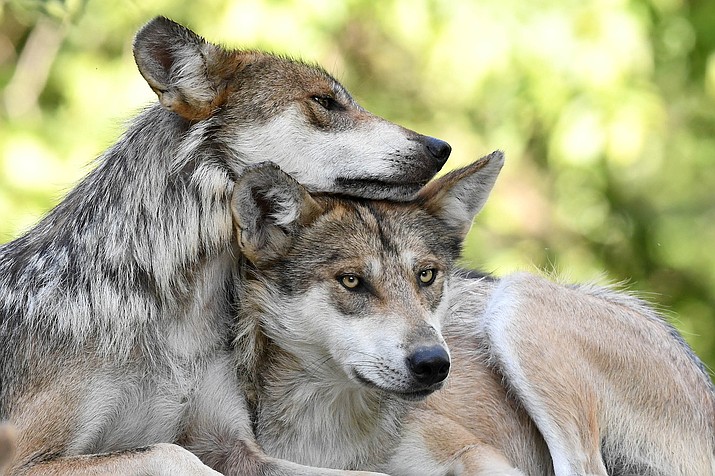 The Mexican Gray Wolf, protected under the Endangered Species Act, could see its recovery stalled if the Interior Department moves forward with a proposal to lift protections for all gray wolves in the lower 48 states. (Photo/Jim Schultz)

BILLINGS, Mont. — U.S. wildlife officials plan to lift protections for gray wolves across the Lower 48 states, re-igniting the legal battle over a predator that’s running into conflicts with farmers and ranchers as its numbers rebound in some regions.

The proposal would give states the authority to hold wolf hunting and trapping seasons. It was announced March 6 by acting Interior Secretary David Bernhardt at a wildlife conference in Denver.

Wolves had previously lost federal protections in Montana, Idaho and Wyoming, where hunters and trappers now kill hundreds of the animals annually.

Wildlife advocates and some members of Congress reacted with outrage to the latest proposal and promised to challenge any final decision in court.

Jamie Rappaport Clark, a former director of the U.S. Fish and Wildlife Service now with the group Defenders of Wildlife, warned of an “all-out war on wolves” if the plan advances.

“We don’t have any confidence that wolves will be managed like other wildlife,” she said.

But government officials countered that the recovery of wolves from widespread extermination last century has worked and they no longer need the Endangered Species Act to shield them.

“Recovery of the gray wolf under the Endangered Species Act is one of our nation’s great conservation successes, with the wolf joining other cherished species, such as the bald eagle, that have been brought back from the brink,” U.S. Fish and Wildlife Service spokesman Gavin Shire said in an emailed statement.

Agriculture groups and lawmakers from Western states are likely to support the administration’s proposal.

Further details were expected during a formal announcement planned in coming days.

Long despised by farmers and ranchers, wolves were shot, trapped and poisoned out of existence in most of the U.S. by the mid-20th century.

They received endangered species protections in 1975, when there were about 1,000 left, only in northern Minnesota. Now more than 5,000 of the animals live in the contiguous U.S.

Most are in the Western Great Lakes and Northern Rockies regions.

Protections for the Northern Rockies population were lifted in 2011. State officials and government biologists say the region’s wolves have continued to thrive despite pressure from hunting. The animals are prolific breeders and can adapt to a variety of habitats.

Wildlife advocates want federal protections kept in place until wolves repopulate more of a historical range that stretched across most of North America.

Since being reintroduced in Yellowstone National park and central Idaho in the mid-1990s, the Northern Rockies population has expanded to parts of Oregon, Washington and California.

Those states so far have not allowed hunting, despite growing pressure from ranchers whose livestock herds have been attacked.

The Fish and Wildlife Service has argued for years that gray wolves have recovered in the lower 48 states, despite experts who contend they occupy only about 15 percent of the territory they once roamed. Agency officials insist the recovery of wolves everywhere is not required for the species no longer to be in danger of extinction.

John Vucetich, a wildlife biologist at Michigan Technological University, said most wolf experts probably would agree the species is not at imminent risk. But said he dropping federal protections was a premature move.

Many people “still find it difficult to live with wolves,” primarily because they kill livestock as well as deer and elk that people like to hunt, Vucetich said. If wolves are returned to state management, he said, “I do worry that some of the states could be overly aggressive and that wolves could fare worse than their current condition.”

The government first proposed revoking the wolf’s protected status across the Lower 48 states in 2013. It backed off after federal courts struck down its plan for delisting the species in the western Great Lakes region states of Michigan, Minnesota and Wisconsin.

Fish and Wildlife Service officials disclosed to the AP last year that another scientific review of the animal’s status had been launched.

Shire declined to disclose the agency’s rationale for determining the species had recovered, but said members of the public would have a chance to comment before a final decision in coming months.

Ryan Yates, director of congressional relations for the American Farm Bureau Federation, applauded the federal agency’s plan and said many farmers and ranchers have lost livestock to wolf kills since the species was granted legal protections. The farmers and ranchers will respect state regulations aimed at managing wolf populations, he said.

“Some people like them, some people don’t, but the law’s the law,” Yates said.

Lawmakers in Congress frustrated with court rulings maintaining protections for wolves have backed legislation to forcibly strip protections in the Great Lakes region and beyond. A similar effort by lawmakers ended protections for Northern Rockies wolves.