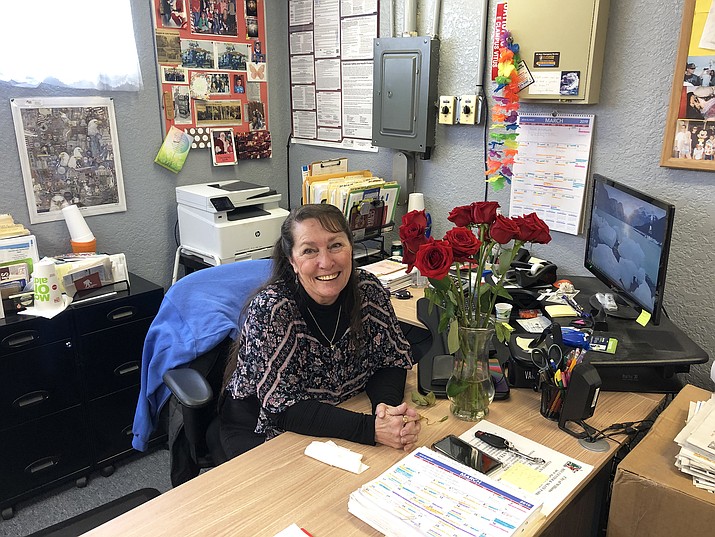 Rose Newbold is retiring as recreation director for the city of Williams. (Wendy Howell/WGCN)

WILLIAMS, Ariz. — Rose Newbold flips through the pages of a well-worn photo album, pointing at the children and telling stories about them as if they’re her own children. And in her mind, they almost are.

“I have thousands of children that I’m very proud of,” Newbold said.

Newbold is sitting at her desk at the Williams Recreation Center on her last day of work, surrounded by bulletin boards of children’s photos and newspaper clippings. Next to her is a large vase of roses, given to her by her friends.

For many people, it’s hard to image the recreation center without Newbold at the helm.

She began working there in 1996 when the downtown recreation program was housed in a single building. There was no swimming pool, no skatepark and no playground.

The pages of her photo albums are meticulous and are a visual record of the efforts that the city of Williams, and Newbold, have put into the department.

Page after page show children playing games, making crafts or just being silly. Others show adult basketball leagues and rodeo activities. Newbold said although she knows it is time to retire, she still finds it difficult to go.

“It’s hard, the summer rec kids will be coming up from last year and I’m not going to be able to finish raising them,” she said wiping a tear away.

Newbold, who rose through the ranks at the recreation department to eventually become the director, retired March 7 after watching a generation of children come through the programs. Those children have grown up, and Newbold has now watched them bring their own children into the programs.

“I have hundreds of them as friends on Facebook, they are all over the country now,” she said of her past attendees. “Many come back with their kids and visit me today.”

Newbold was raised in California, but came to Williams with her family to get away from the congestion and crime they had been around. She and her husband purchased a 50-acre ranch west of Williams in 1996.

“I originally came up and interviewed for a job at City Hall, but didn’t get it,” she said. “But through that interview they called me up and I started working here for $6 an hour, they just needed somebody here with the kids.”

Newbold said her first years at the rec center were some of the most enjoyable times she has experienced.

“I remember working til 10 at night, kids were just everywhere,” she said. “It was so fun I remember spending three hours making the drive home through a snowstorm down the mountain to get home one night, and I didn’t mind. I’m not sure I’d be able to do that now.”

When Newbold first began working for the Parks and Recreation Department, the recreation building had just been acquired from the Cureton family.

The building had been a hardware store and behind it was an indoor lumber yard.

“We parked our trucks in the lumber building and there was a big scary tree out front and an old barn where the playground is today,” she said.

Newbold and her staff created a recreation master plan and with the financial help of the city and several grants, began developing the property around the recreation building.

One of the first developments was the skatepark, which was pushed by several enthusiastic skateboarders who desired a safe, legal place to skateboard.

“The kids really wanted a skatepark,” Newbold said. “The ordinance said kids couldn’t ride on sidewalks, but it didn’t say they couldn’t skate down the middle of the street.”

Newbold said this created quite a problem for the police department.

“There was this issue about what are we going to do with the kids riding down the middle of the street with all the tourists and others,” she said, “So the kids said if you give us a skatepark, we will move.”

In 1995, Dan Pawlicki and professional boarder Brian Harper went to the city council and gained support. The council allocated some money to Newbold for the development of Cureton’s old lumber building.

“My older kids that were 18 to about 23 years old were really into construction,” she said. “They came every night for about two months and built the ramps that are still out there today.”

Newbold said the building didn’t have heat or a restroom for several years.

“I’ll have kids that will come in with their kids today and they’ll say they remember working on the skatepark,” she said.

Newbold said the creation of the skatepark also holds a special place for her personally.

“That was the year I lost my son,” she said referring to the loss of her son in a traffic accident. “These kids and this place saved my life.”

In addition to the skatepark, Newbold was a part the construction of an indoor swimming pool, an outdoor basketball court and two playgrounds.

“For many years the playground sat with mud all around it,” she said. “We didn’t have money for surfacing until Brandon Buchanan came. He got a concrete guy to come in and that’s when we also got the tiny tots playground done.”

Newbold said she is proud of the development she has been a part of with the recreation department, and is also proud of the work that has been done at several city parks and the rodeo grounds.

“But the city as a whole has improved so much in the past 20 years,” she said. “When I first rolled into town there was a motel by the cemetery that had collapsed. It was the first thing that you saw.”

“I have been very fortunate — I have great part-time staff and the best full-time staff,” she said. “You have to have people who are dedicated to children really love their job and are responsible and reliable.”

Looking back over the 22 years, Newbold said she will miss Summer Rec most of all.

“The hardest thing for me is going to be not doing Summer Rec this year,” she said. “I have all the paperwork and liability stuff and the not fun part of the job, but I always looked forward to those eight weeks with the children. They would revitalize me. Spend a week in here with them running back and forth screaming and it will make anybody happy.”