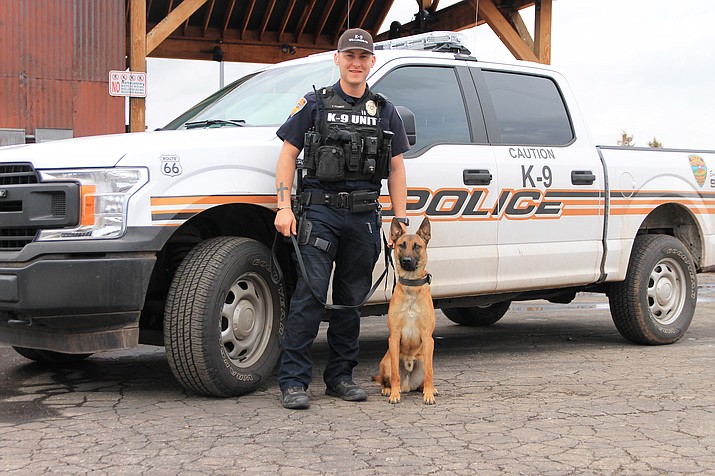 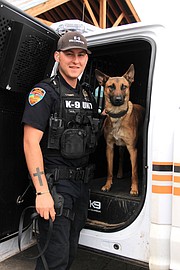 WILLIAMS, Ariz. — Although Williams Police K9 Nitro has only been certified for two weeks, he has already proven his usefulness in the detection of narcotics in two traffic stops in Williams.

On Feb. 23, Williams Police K9 officer Tyler Forbes was called to assist with an incident involving possible illegal drug use or possession. Using Nitro, Forbes was able to help determine that a vehicle stopped in Williams was transporting drugs and the driver was arrested on nine charges for drug possession and possession of drug paraphernalia.

Less than a week later, on March 4, Forbes and Nitro again assisted with a traffic stop where there was reasonable suspicion that drugs were in the vehicle. Nitro alerted Forbes to drugs on the passenger side of the vehicle. The driver was charged with one offense of possession of drug paraphernalia.

Nitro is a one-and-half year-old Belgian Malinois who was donated to the department by K-9 Defense in Phoenix as a puppy. Nitro spent the first year of his life undergoing intensive police training at the K-9 Defense facility, with Forbes joining the dog on weekends.

In October, Forbes and Nitro spent the month at the Canine Academy at Maricopa County Sheriff’s Office.

Since then, Forbes has had Nitro with him in Williams almost 24-hours per day. Before Nitro could officially assist with police situations, he spent time riding in the patrol truck with Forbes as Forbes continued to train him locally and with other K9 units in Verde Valley.

“Every Wednesday I take him down to training,” Forbes said. "I have to have a minimum of 32 hours per month of training just to keep up with the certification.”

Forbes said the training consists of dog obedience, bite work, area and building searches and narcotic work with five other police departments, including Cottonwood, Camp Verde, Sedona and Yavapai-Apache. Each department has one dog.

To become certified with the Arizona Law Enforcement Canine Association, Forbes and Nitro had a series of tests to pass. These tests included obedience, searches and bites. 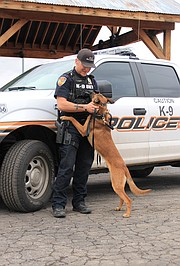 “He has to be able to verbal out, which means if I send him on a bite, without even touching I have to be able to call him off the bite and come back to me,” he said. “It’s tricky.”

Having a police dog is a big commitment for a K9 officer. Forbes keeps the dog with him during shifts and while at home.

“Honestly it’s like having a little kid at home,” Forbes said. “I can’t go anywhere without having somebody I trust that works in the department watch him. I work with him every day, even on my days off. I take him outside and work on his obedience.”

In addition to the recent traffic stops, Nitro has also been put to work on a local search and as a narcotics dog at the high school.

“At work he just rides around with me and if I need him, then cool,” Forbes said. “Like today we went to the high school and sniffed the lockers.”

On traffic stops, Forbes can use Nitro under strict protocols. He cannot just bring Nitro out to sniff for narcotics on every stop.

“He has to meet the criteria, people have their rights that you can’t violate,” Forbes said. “You have to have reasonable suspicion first.”

Forbes said his law enforcement training and K9 officer training have prepared him on what to look for on a traffic stop. He said the behavior of the occupant and other indicators can lead to reasonable suspicion of illegal narcotics in a vehicle.

Williams Police Chief Herman Nixon said the department plans to utilize Nitro as much as possible.

“We’re getting a lot of drugs coming through,” said Williams Police Chief Herman Nixon. “We are going to send our canine down with the Yavapai County interdiction team. Twice a month we are going to start running interdiction because that stuff is making its way into our city.”

Numerous local businesses and community members have donated money and assisted Forbes with the new K9 program at Williams Police Department. These include the Shadows Foundation, Findlay Toyota, Babbitt Ford, Colors of the West, Kicks on Route 66, Grand Canyon Brewery, KAFF Country and many others.

Police K9 could be coming to Williams
Community giving: Donations pour in for Williams Police K-9
Yavapai K9 leads to $1 million cocaine seizure near Ash Fork
Over 30 pounds of drugs seized on I-40 near Ash Fork
Sniffing out success with community support
Event Calendar