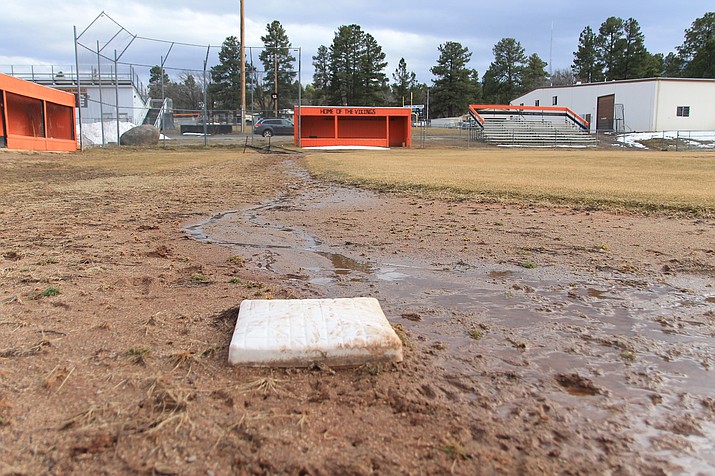 Wet weather has prevented the Vikings from practicing on their infield. (Wendy Howell/WGCN)

WILLIAMS, Ariz. — With the record breaking snowfall that Williams has seen in February, the Williams Vikings baseball team is eager to find dry ground as they enter into the 2019 season. The lack of field time has taken its toll on the Vikings as they have faced six losses in their first six games of the season.

The Vikings were supposed to open the season Feb. 26 in a nonconference game with Northland Prep Academy in Flagstaff, but it was cancelled when northern Arizona was blanketed under 3 feet of snow three days prior.

Because of all the recent wintery weather, the Vikings have been holding practices inside the gym to begin the season. Practicing indoors has been frustrating, head coach Johnny Hatcher said — with players practicing swings with a pitching machine, and pitchers limited to throwing strikes behind nets.

On March 5, the Vikings faced Mohave Accelerated in Bullhead City, where they lost 12-2.

“It didn’t go well, that was our first day playing outside,” Hatcher said.

The Vikings then travelled to the annual Route 66 Tournament in River Valley where they finally got time on dry grass. The Vikings lost to Mohave, 6-3, the Meadows School, 8-4, Palo Verde Valley, 7-4, Camp Verde, 6-0, and Kingman, 7-1.

Despite the losses, Hatcher is eager to see what the Vikings can do after some regular reps on their home field.

“We’ve just been working that hand that’s given to us,” Hatcher said. “We can’t go outside, I can’t call practice off so we bring it inside.”

Looking to build on the successes of the 2018 team, Hatcher said he was pleased with the Vikings’ play in 2018 when they went 20-9 overall and 7-1 in the region.

Hatcher has been able to get the team in shape with runs on the paved streets, but practicing indoors has kept the Vikings from the time they need to face live pitchers, Hatcher said.

“We can pitch and we can hit, but right now we aren’t doing either one of those well,” Hatcher said. “We’ve got a good group, we just need to pull it together,”

The Vikings faced Chino Valley March 12 and then head to Camp Verde March 16. Their first scheduled home game is March 18 at 2 p.m. against Bagdad.