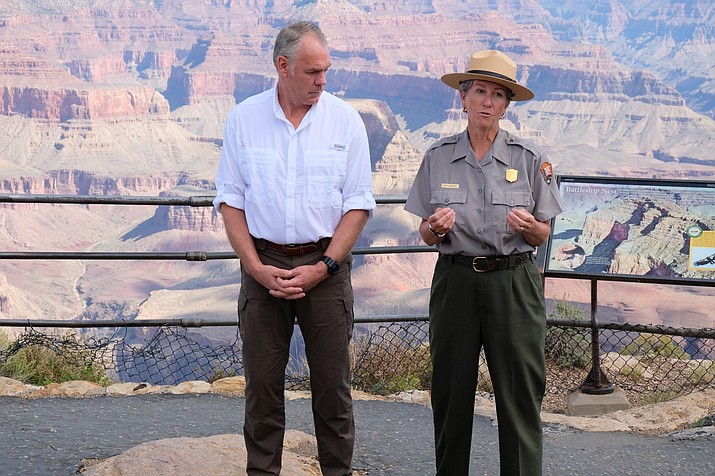 Grand Canyon Superintendent Chris Lehnertz is returning to the park after an OIG investigation initiated in October cleared her of any wrongdoing. (Loretta Yerian/WGCN)

FLAGSSTAFF, Ariz. — The superintendent of Grand Canyon National Park has not returned to her job nearly a month after being cleared of accusations that she created a hostile work environment, improperly disciplined an employee and wasted park resources.

Christine Lehnertz was reassigned in October while investigators from the Interior Department's Office of Inspector General looked into the allegations, which weren't made public until Tuesday when the office released its investigative report. The National Park Service announced last month that Lehnertz was fully exonerated.

In the eight-page report, investigators interviewed 20 employees of all seniority levels who worked directly with Lehnertz. Of the 20, 15 indicated that she was generally liked at the park, didn’t treat male or female staff differently and held every employee to the same standards. Four employees said they had had conflicts or disagreements with the superintendent, but agreed that her management style was inclusive and respectful. One employee said she didn’t believe her complaint about a supervisor was handled appropriately by park management.

While Lehnertz did tour a park residence and suggested a list of about 20 projects, ranging from very small to a redesign of the kitchen. However, after informing housing officials, Lehnertz was no longer involved in the renovation process. The housing official said many of the same items were on a list she previously made and noted that while renovations were taking place, a number of structural deficiencies were found, including out-of-code wiring, that had to be addressed. A maintenance employee who worked directly on the project said the costs were reasonable for the amount of work performed.

The investigation also found Lehnertz acted appropriately in imposing a one-day suspension on a senior official for repeatedly not following her directives to obtain an Employee Performance Appraisal Plan (EPAP) concerning a subordinate employee and lying to her about the status of a high-priority project he had been assigned to oversee. The senior official told investigators he had not and would not provide the EPAP to Lehnertz, even though he had been instructed to do so by both the NPS regional manager and Office of Special Counsel. The senior official also missed a meeting with Lehnertz to discuss the high-priority project, saying he recalled being in Flagstaff that day, but investigators found that he clocked a regular work day in the park and updates to his calendar indicated the scheduled meeting.

Despite the findings, Lehnertz has not yet returned to Grand Canyon.

Lehnertz was expected to return to the Grand Canyon in time for its Feb. 26 centennial celebration as a national park. But her attorney, Kevin Evans, advised her to hold off because of what he says are persistent, baseless accusations against top management.

"It seems that the National Park Service can't get its ducks in a row and its house in order," he said.

Evans said he is negotiating with the agency on Lehnertz's employment status but would not elaborate. Meanwhile, she's working out of the park service's regional office in Denver on a development and training project for park superintendents.

Park Service spokesman Mike Litterst said the agency cannot comment on personnel actions or a timeline regarding Lehnertz's return to the Grand Canyon. Lisa Carrico is serving as acting superintendent at one of the country's busiest national parks, with more than 6 million visitors annually.

Lehnertz told The Associated Press in February that she was excited to celebrate the national park's 100th anniversary and get up to speed on work to replace a water pipeline that frequently breaks. She praised employees for weathering the longest shutdown of the federal government.

Lehnertz became the Grand Canyon's first female superintendent in 2016 after a sexual harassment scandal led to the retirement of its former chief. She was tasked with changing the culture at the Grand Canyon after an earlier report by the inspector general's office found that some men in the now-defunct river district demanded sex from female colleagues and retaliated against women who refused.

She was reassigned during the latest investigation because the park service said it wanted to protect the integrity of the inquiry.

Evans said the allegations were "groundless and malicious" and said the way the park service handled the situation harmed Lehnertz's reputation.