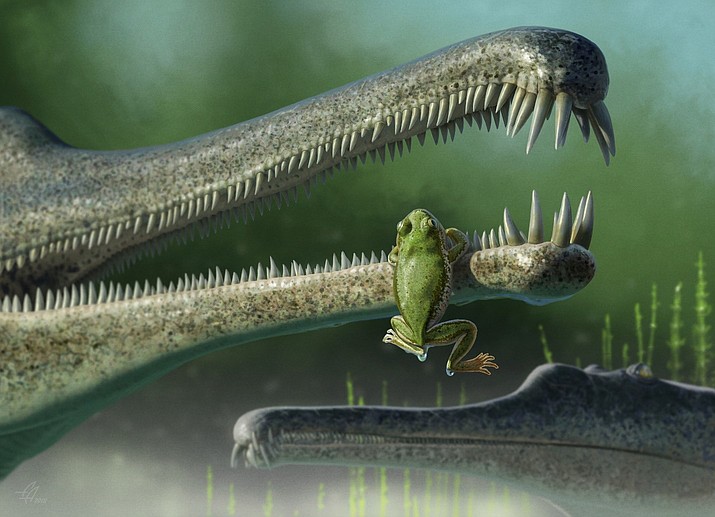 A Triassic frog clings to the snout of a phytosaur. (Artist rendering/Andrey Atuchin courtesy of NPS)

The fossils were found in the Upper Triassic Chinle Formation (about 213 to 220 million years old) at Petrified Forest National Park, a neighboring ranch, and a quarry near St. Johns, Arizona. The fossils belong to a group called Salientia, which includes living frogs and their closest evolutionary ancestors. These frogs are small (about 15 mm long) and are identified by their hip bones. The fossils that were collected by washing fossiliferous rocks through metal screens of various sizes are characteristic of frogs and not the other amphibians present at the time, the metoposaurs.

Earlier frogs exist from Lower Triassic rocks (about 250 million years old), but they are from higher-latitude sites (today’s Poland and Madagascar) in Pangaea, the mega-continent that existed during the Triassic Period. The new frog fossils described by Stocker and her colleagues are the oldest frogs in North America and are the first frog fossils to be found from a location that was near the equator during the Triassic. These fossils, along with others from Lower Jurassic rocks on the Navajo Nation suggest that in what is now the Southwestern U.S. frogs survived the drier climate and hypothesized mass extinction at the end of the Triassic Period.