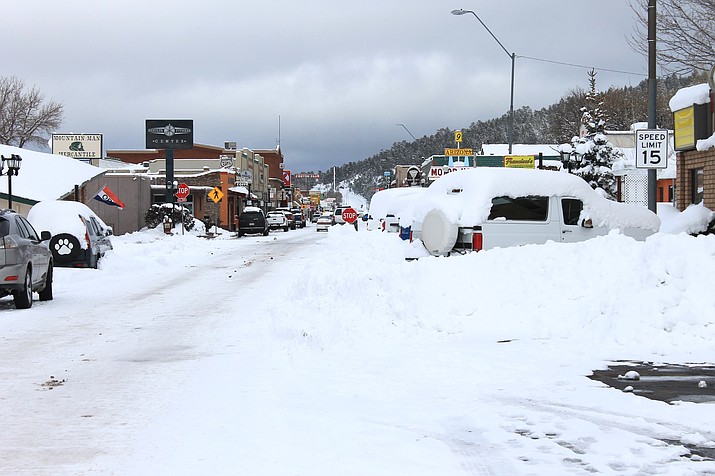 City crews had difficulty navigating snow removal equipment because of vehicles that were left parked on the streets in last month's storm. (Wendy Howell/WGCN)

According to Mayor John Moore, city crews had difficulty navigating because of vehicles that were left parked on the streets prior to the storm.

“We may not have this problem against this year, but we need to emphasize how when you leave your car on the street it messes up the whole block.” Moore said.

The city of Williams has an ordinance prohibiting parking on any public street, boulevard or alley during snow removal. If a vehicle is in violation of the ordinance, the Williams Police Department is authorized to tow the vehicle at the owner’s expense.

“We have had to tow people, but I’ve been here 13 years and we’ve only done it once,” Police Chief Herman Nixon. “But it may come down that. Our main concern is so emergency personnel can get through.”

Nixon said snow removal crews not only were unable to clear streets with parked vehicles, but they were unable to pass those vehicles on their way to clearing other streets.

“The snowplows can’t get through,” he said. “We spent a couple hours running down people trying to get their cars off the street and that shouldn’t be happening.”

Nixon said although the ordinance is for the entire city, the main corridors were the biggest problem.

“Those blades on those plows need that room to get that snow off the street and they can’t do that if there are cars on the road,” he said. “It’s a danger to them and the cars.”

Nixon said in the event of another major snowstorm, city crews and officers can help people relocate their cars prior to the storm.

“We will try to help people find somewhere else to park,” he said. “We will even go get them and take them to their car.”

Moore said the city declared an emergency during the February storm to help recover money used for snow removal and overtime during the event.

The city of Williams Stormwater Master Plan was passed with some wording changed by the council.

With the retirement of Recreation Director Rose Newbold, Mayor John Moore appointed Lee Payne and Dawn Trapp to be a part of the committee to help fill the position.

The mayor also appointed a committee consisting of councilmembers Bernie Hiemenz, Frank McNelly and James Wurgler to consider and study what direction the city may decide to go in seeking to fill the magistrate’s office.

Pamela Galvan stated she is now posting Front Burner Media’s quarterly reports under the Do Business section of the city’s website.