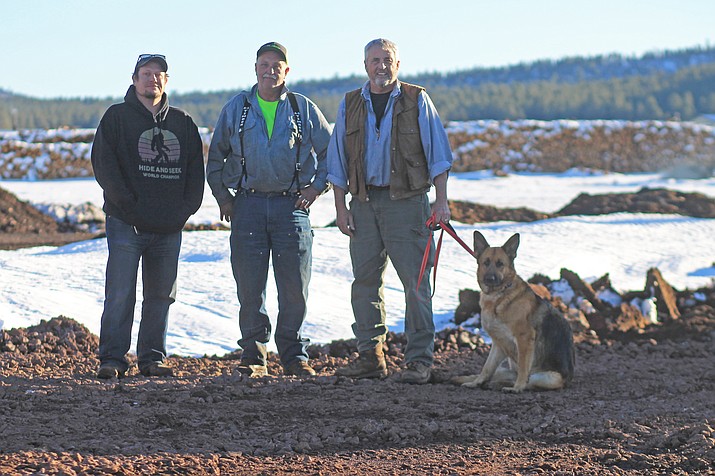 WILLIAMS, Ariz. — The company that holds the largest contract for the Four Forest Restoration Initiative (4FRI) has new owners.

Pacific Northwest logger Tom Loushin and his former Washington-based company are part of a merger that included investing in NewLife Forest Products, or Good Earth Power, which has held the U.S. Forest Service phase I stewardship contract of 4FRI since 2013.

Loushin brings over 40 years of logging and industry experience to northern Arizona and hopes to jump start the lagging restoration of the overgrown ponderosa pine forests with his expertise in large-scale timber operations acquired while working in Washington state and Alaska.

NewLife Forest Products, LLC has plans to build a state-of-the-art lumber mill at a site purchased on Garland Prairie Road in Williams.

“It will be the first mill of that caliber in the state of Arizona,” Loushin said.

4FRI is an effort by the U.S. Forest Service to restore 2.4 million acres of dense forest on portions of the Apache-Sitgreaves, Tonto, Coconino and Kaibab National Forest in northern Arizona. The project began in 2012 and came on the heels of several years of devastating wildfires across the state. However, the project has lagged because of financial and technical challenges faced by loggers.

The 300,000-acre phase I contract for 4FRI was initially issued to Montana-based Pioneer Forest Products in 2012, however one year into the project Pioneer stepped away and the U.S. Forest Service gave the contract to Good Earth Power AZ, LLC.

The new owners of NewLife believe they have adequate financial backing and a viable plan to come closer to thinning the acreage outlined in the phase I contract.

Loushin said selling the lumber is not a problem as the company already has numerous markets for that product, but developing markets for the remaining biomass has been the difficult part.

The U.S. Forest Service and other stakeholders have said efforts to treat Arizona’s forests are being bottlenecked by the massive amount of biomass produced with thinning. Forest biomass refers to pine needles, branches, bark, treetops and small trees that must be removed from a forest during tree thinning, but aren’t easily marketable in the lumber industry.

“There are a limited amount of markets currently available to us within an economically viable distance,” said NewLife head forester Sam Boyd. “We’re utilizing and accessing those markets as best we can, but they are limited. It’s expensive to not only get rid of the biomass but to get it delivered.”

NewLife Forest Products, LLC has plans to build a state-of-the-art lumber mill at a site purchased on Garland Prairie Road in Williams. The company said its priority is to complete work on the 4FRI contract. (Wendy Howell/WGCN)

Boyd said the biomass controls the gate on how fast forest thinning can occur.

“We’re working with the Forest Service not only on those markets but also on other techniques and methods to be able to mitigate the biomass,” he said.

Loushin said the company is exploring other options for dealing with the biomass.

“There’s a lot of options we can’t talk about right now on the biomass,” he said. “But that’s where we are at today…the good news is there are conversations going on. There is new consumption and new demand on that particular material.”

A recent decision by the Arizona Corporation Commission could help NewLife handle the biomass situation. The ACC’s decision will require the state’s utilities to produce 90 megawatts of energy annually from forest biomass. However, the commission must still adopt a final rule, with many key details still undetermined. A study conducted by the Arizona Corporation Commission analyzed the possibility of a biomass energy plant in Alpine, Camp Verde, Payson, Williams or Winona.

Loushin said the decision by the ACC was “encouraging.”

With hundreds of thousands of acres still waiting to be thinned, Loushin said he hopes to treat several thousand acres in 2019, with plans of reaching more by 2020.

In addition to finding an economically feasible way of disposing biomass, Loushin said having an onsite mill is important in ramping up production.

“You’ve got to have a place, a manufacturing facility,” Loushin said. “We need to bring infrastructure back into this state…we’ve got to build a facility that is capable of consuming that amount of volume. There will be significant changes here this year.”

Loushin said NewLife has a temporary small sawmill that has been running for a few days, but said work is under way on a permanent large-scale sawmill on the Garland Prairie property. The company intends to do all timber harvesting, milling and transportation in-house.

“We are doing everything,” he said. “It is company owned. People can expect to see some real significant changes here by summer. As soon as the weather changes a little bit you will see groundbreaking and the new mill being built.”

Although Boyd anticipates the mill handling multiple contracts, he said NewLife is focused on completing the 4FRI phase I contract.

“Right now our focus is to commit to the agreement of the 4FRI contract and getting the wood out to meet that,” Boyd said. “We are going to focus on the 4FRI project for the next three years as much as we possibly can.”

Loushin brought approximately 25 employees with him from Washington to Williams and is currently looking locally to fill numerous positions with the company.

“We are going to create jobs, and we’re going to build a company here that is going to be a very viable operation that will succeed for a long time,” Loushin said. “It would be good for the town, it would be nice for the economy…”

Our original headline for this story and the caption of the photo both erroneously reported that NewLife was acquired by Tom Loushin. Loushin is actually a minority investor in NewLife. His investment did not result in Loushin or his company acquiring the 4FRI contract. According NewLife Forest Products, LLC it was a merger. In addition, Good Earth Power AZ, LLC did not change its name to NewLife Forest Products as the story originally reported. There is in fact no history of a name change or restructuring and Good Earth Power AZ, LLC is an active entity in good standing with the Arizona Corporate Commission.