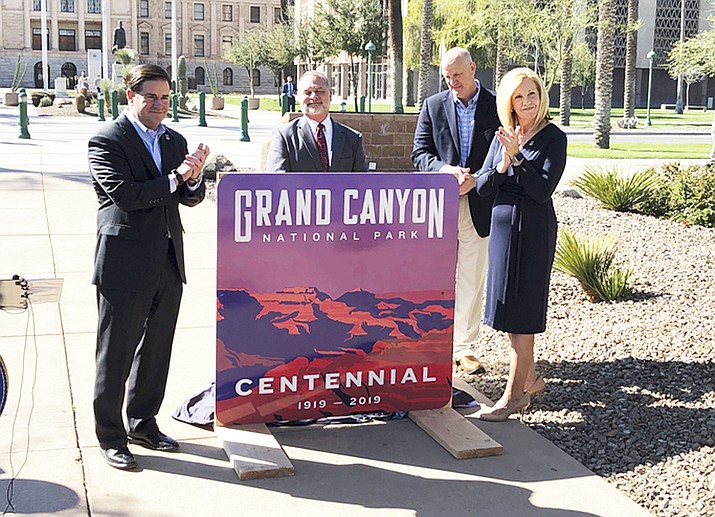 Arizona Gov. Doug Ducey, left, applauds after unveiling a highway sign commemorating the 100th anniversary of the Grand Canyon’s designation as a national park alongside, from second left, Arizona Department of Transportation Director John Halikowski, state parks director Bob Broschied and Arizona Office of Tourism Director Debbie Johnson Feb. 27 in Phoenix. Forty of the the Grand Canyon signs will be placed on highways around the state. (AP Photo/Jonathan J. Cooper)

PHOENIX — Arizona will install 40 highway signs around the state commemorating the 100th anniversary of the Grand Canyon’s designation as a national park.

Gov. Doug Ducey unveiled the signs at the state Capitol Feb. 27. He says the signs are a chance to celebrate the Grand Canyon as a treasure to the nation and to Arizona. He says it’s a boon to the state’s tourism economy.

Arizona Office of Tourism Director Debbie Johnson says the signs will help promote the national park to visitors and to people who live in Arizona but have never visited.

She says the $30,000 cost is funded by the tourism office and Arizona Public Service, the electric utility.

The signs will replace some of the dozens commemorating Arizona’s centennial around the state.