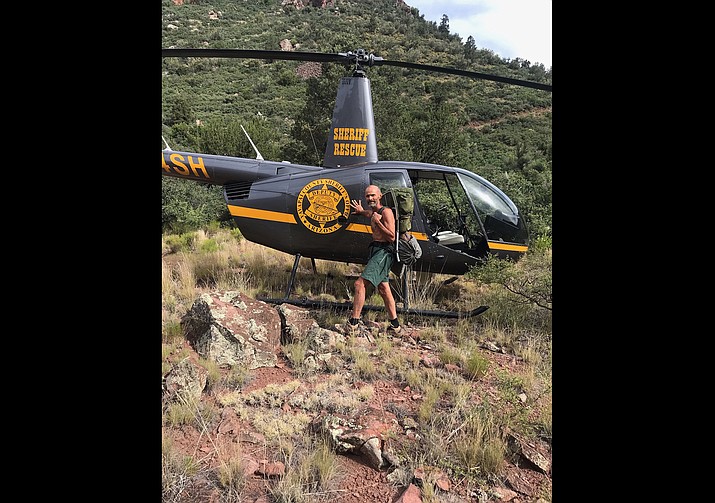 John Saville gets ready to load Rescue 1 after getting lost hiking north of Prescott June 25. (YCSO/photo)

If John Saville weren’t an experienced hiker, it is possible that the 64-year-old would have died after spending 18 days alone and lost in the wilderness 60 miles west of Prescott.

YCSO deputies say that, overall, Saville’s health was “good,” but that he was hungry and thankful for the efforts to find him.

The 5-foot-6, 130-pound Saville left his home in Prescott around 3 p.m. June 7, in his faded silver 1991 Nissan pickup with a red tailgate, after telling his family he was going on a long hike. He intended to return home sometime between June 16 and 18.

The Sheriff’s Office said it learned at noon June 20 that Saville was missing. Deputies immediately deployed 4x4/quad units and a Department of Public Safety (DPS) Ranger helicopter to the area, but found no sign of Saville or his vehicle. On June 21, YCSO’s Rescue 1 helicopter flew about eight hours in a widened search area, but again didn’t see any signs of Saville or his pickup.

YSCO search and rescue teams finally located found Saville’s vehicle on June 23 but didn’t see any signs of him.

Saville told deputies that he had tried to find his way back over the past few days, since June 23.

An air mission on June 25 surveyed and searched the area, particularly waterways. Just after 4 p.m., a Rescue 1 observer spotted Saville waving a red sleeping bag in a clearing near a stream in the Upper Burro Creek Wilderness west of Prescott. YCSO found Saville eight miles from his vehicle, separated by rugged terrain.

After spotting a safe landing zone for the helicopter, the observer hiked to Saville’s location and escorted him to the helicopter. The topography where Saville was found features steep canyons and rocky terrain along these waterways.

Saville expressed concern that he would have to pay for the search effort. However, YCSO Public Information Officer Dwight D’Evelyn said that has “never the case,” and YCSO “does not want anyone to ever avoid calling for help because of cost concerns.”

Although Saville said he is an experienced hiker, which increased his chances for survival, YCSO deputies say his adventure carries important lessons for those intending to go on long hikes away from home.

-Sharing your basic itinerary and intended hiking location with family. D’Evelyn said Saville shared these things with his family members, who were “smart to call YCSO when he did not return at the predesignated time.”

-Carrying a cellphone. Saville did not have any communication devices, cellphone or otherwise, D’Evelyn said.

“In this particular area, cellphone reception is spotty at best,” he added. “A GPS tracking device, which communicates by satellite, would allow immediate notification to local authorities that you are seeking help while providing GPS location coordinates. These devices also allow hikers to share their whereabouts with family and friends via tracking software. For about $100, you could simply avoid several days lost in the wilderness.”

-Hiking with another person or persons. Saville was hiking alone. If he had suffered an injury and couldn’t move without a companion and no way to communicate, help could be days away. “A life-threatening injury may not be survivable under these conditions, especially during extreme weather events,” D’Evelyn added.

YCSO thanked “the many volunteers who devoted time and energy throughout” the search.

“Your service to the community is invaluable,” D’Evelyn said.