Extensive planning and coordination behind Fourth of July fireworks 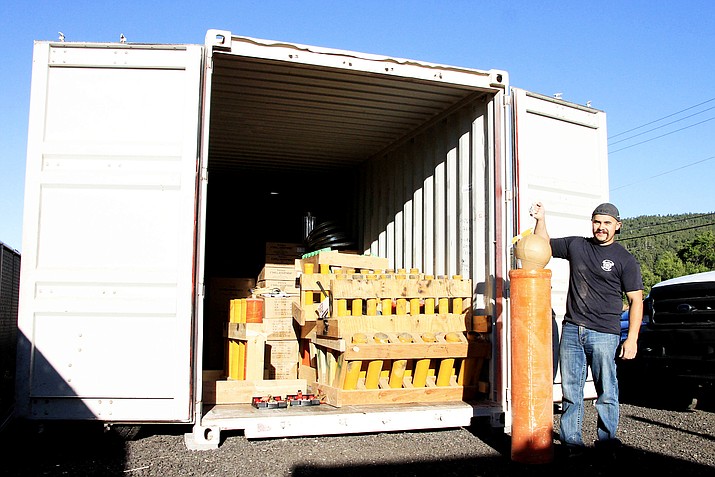 Williams Fire Lieutenant Justin Sandoval is the head pyro for the 2019 Williams Firework show, which will feature more than 1,400 fireworks. The show takes place July 4 around 9 p.m. northwest of Williams. (Loretta Yerian/WGCN)

WILLIAMS, Ariz. – With more than 1,400 fireworks already purchased, Williams Volunteer Fire Department is planning to deliver one of the best Fourth of July shows in northern Arizona.

The show will launch from Gonzales Lake, north of I-40 and west of Love’s Travel Stop and can be seen from many locations in Williams. It will start around 9 p.m. and will feature shells (fireworks) ranging from 1 to 10 inches, with the larger shells having the ability to be seen up to 1,000 feet in the sky.

A coordinated effort of multiple agencies is a necessary component to a successful Fourth of July firework show. (Map/Williams Volunteer Fire Department)

“Sometimes we need to have events for our local residents,” said Williams Mayor John Moore. “It’s been a long time celebration that we do when conditions permit. It supports our veterans and it supports our community.”

The last firework show put on by the city was in 2017, after a 10 year hiatus. The city had not had a Fourth of July fireworks display since 2007, when dry conditions resulted in a small fire.

As long as weather conditions permit, Williams’ firefighter and Incident Commander John Moede said the public should plan for a very memorable show.

“We have had a very good winter therefore our fuel moistures are high which is a very good thing,” Moede said.

Sandoval said the department chose Gonzales Lake as the firing spot for the show because of the necessary buffer zone.

Fireworks are shot from mortars that are coordinated to match the same size shell. This year's show will feature shells from 1 to 10 inches, with 10 inch shells having the capacity to travel up to 1,000 feet in the sky. (Loretta Yerian/WGCN)

“For every inch shell that we have, we have to go outwards 70 feet per inch. Given that we have a 10 inch shell we need to be 700 feet in a circle in all directions from that center. No habitable structures can be there,” he said. “Out at Gonzales Lake it gives us a buffer of around 400-500 hundred extra feet if we have a light breeze or windshifts, things like that.”

In addition to location and ordering the product, careful planning for the show is taken into consideration. This includes fire department personnel to help with the show and coordinated resources with police, fire and other emergency operations.

“It’s not just people but it’s also cooperation,” Moede said. “The groundwork was set for this when we did fireworks in 2017.”

Moede said Mike Uebel, a fuel specialist for the U.S. Forest Service was instrumental in helping during the 2017 fireworks and is a major player this year.

While most shows are electronically fired. Williams Fire will hand fire the entire show. In order to do this safely, firefighters are sent to shooter school or are given in-house training.

“This is an older method — what Williams has always done,” Sandoval. “We do have capabilities to do some electronic (and) maybe in the future we’ll branch out into electronic — for right now it was such a tight time frame to get everything ready that hand firing is the way we’re doing it.” 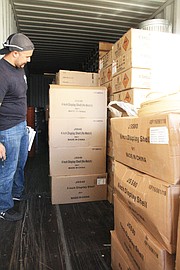 During hand firing operations, firefighters secure a road flare or fusee to the end of a piece of conduit which is then used to light the fireworks. The fireworks are being fired from mortars or cannons that are matched to the size of each firework. Sandoval said around 10-15 firefighters will be on–hand to shoot and re-load the mortars.

“This is probably a medium sized show,” Sandoval said. “For around here it’s a pretty big show.”

Moede said the department does have plans for spot fires, forest fires and back-up emergency plans.

As for the best place to watch the fireworks?

“You can most likely see it from all of Williams,” Sandoval said. “We try not to have anyone park on the side of the highway. We will have DPS, ADOT shooing people along, so don’t stop on the highway. Don’t park on the main roads. I believe the rodeo grounds is going to be a spot that is broadcasted for the show.”