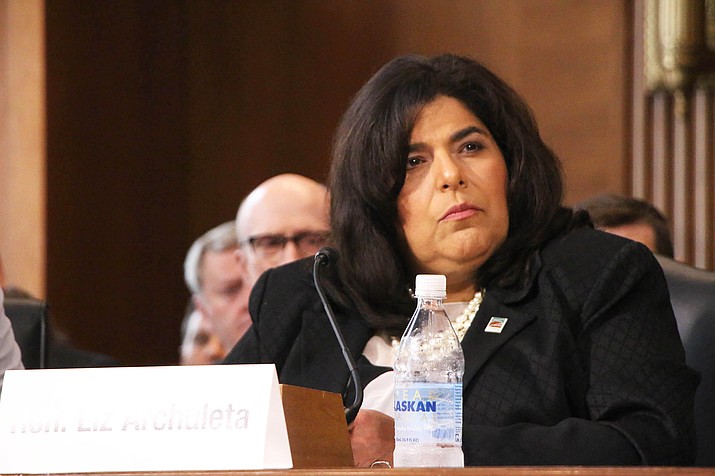 Coconino County Supervisor Liz Archuleta told a Senate committee that local governments are willing to do what they can to help clear the multibillion-dollar backlog in national parks projects, but the federal government needs to do its part. (Photo by Julian Paras/Cronkite News)

Coconino County Supervisor Liz Archuleta told the Senate Energy and Natural Resources Committee that local officials have some ideas on how they can help clear that backlog, but that nothing will happen without federal support.

“We must ensure that future generations can see and appreciate our rich history in these places,” said Archuleta, who was testifying on behalf of the National Association of Counties.

Committee members acknowledged the problem, but they also made clear that there has to be a combination of solutions in order to make a dent in the multibillion-dollar backlog.

“Our national parks are one of the nation’s greatest ideas, and it falls on us to make sure we are laying the groundwork for the next 100 years,” said Sen. Joe Manchin, D-West Virginia. “It is clear, it cannot be addressed solely through the regular appropriations process.”

Committee members called on witnesses to suggest longer-term, reliable revenue sources at a public and local level, such as public-private partnerships, philanthropic donations and even adopting ideas from states that have found ways to maintain revenues.

Sen. Lisa Murkowski, R-Alaska, said that while the National Park Service has the bulk of unfilled maintenance items, there are also billions of dollars of projects that have not been funded in the U.S. Forest Service, the Bureau of Land Management and the U.S. Fish and Wildlife Service.

“These four agencies face a combined deferred maintenance backlog totaling $19.4 billion, an overwhelming amount that covers everything from direct visitor experiences to projects that will never be noticed by the average family,” said Murkowski, the chairman of the committee.

Projects like the ailing water system at Grand Canyon National Park, which Archuleta said is more than a decade past its original predicted life expectancy.

“The priority for the maintenance at this particular time is the water pipeline,” Archuleta said after the hearing.

She said pipes regularly break from rockfalls, leaving the park to haul in water and institute water restrictions. Visitors have a poorer experience if restroom and dining facilities are limited because there is not a reliable source of water, Archuleta said.

The Grand Canyon is the biggest, and neediest, of the 23 national parks and monuments in Arizona that had a combined maintenance backlog of $507.5 million in fiscal 2018, according to government data.

Archuleta was one of five witnesses at the hearing, along with officials from the Forest Service, Interior Department, and business and advocacy groups. Few were able to offer potential solutions to the shortfall, but Archuleta told senators that Coconino County has a proposal that could produce more revenue for the park and its maintenance.

That plan calls for keeping the North Rim open for an additional two weeks in the spring and fall – but that can only happen once the pipelines are updated, she said.

“If we were able to ensure that the pipes would not freeze for four weeks, it would mean a $14 million impact to our area,” Archuleta said.

The Grand Canyon is a major economic driver for the state generally and northern Arizona in particular, regularly attracting more than 6 million annual visitors who contributed $947 million to the local economy last year, according to a National Park Service report.

“We have wonderful tourists that visit our area, it’s a great robust economy we have,” Archuleta said. “So we’re really calling upon the committee to provide adequate funding for deferred maintenance.”