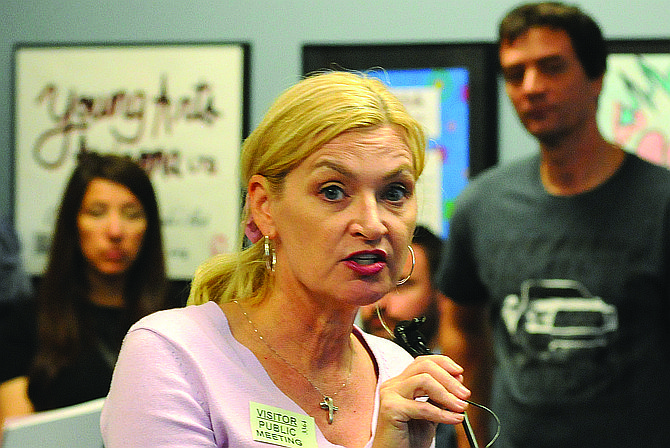 Marlene Hinton testifies Monday at the state Board of Education urging members not to revamp sex ed rules, telling them “there’s a lot of what’s commonly called junk research out there” about the topic. (Capitol Media Services photo by Howard Fischer)

PHOENIX — Facing a barrage of parental criticism, the state Board of Education decided July 24 to scrap a proposal to remove certain language from the rules on sex education.

Several members of the appointed board said they are unwilling to consider the kind of changes being proposed, not just by gay rights advocates on one side but a coalition of parents on the other who want even more restrictions on what can be taught. Armando Ruiz said that is the purview of elected state lawmakers.

“We’re not the Legislature,’’ he said.

Monday’s decision is most immediately a defeat for Sen. Martin Quezada, D-Glendale, and allies on the Gay, Lesbian, Straight Education Network which sought to remove verbiage that now bans the teaching of “abnormal, deviate or unusual sexual acts and practices.’’ Instead, that proposal sought to spell out that sex education instruction must be “medically and scientifically accurate’’ and that courses provide “medically accurate instruction’’ on methods to prevent the transmission of disease.

That provoked a firestorm of protest, with more than four dozen foes showing up to tell the board to back off. It also raised questions from Rep. Kelly Townsend, R-Mesa.

“Who decides what’s medically accurate?’’ she asked the board, suggesting that scientific studies often reach the result desired by the organization that funded the research.

During the approximately four hours of testimony several parents took swipes at state schools chief Kathy Hoffman, who took office in January, for even putting the Quezada proposal on the agenda.

“You’re injecting your political beliefs,’’ said Scott Weinberg who said he has two children in the Kyrene Elementary School District.

“I understand that you won that election,’’ he said. “But that doesn’t give you the right to change the curriculum for all of our children.’’

Lesa Antone was more direct, focusing on the state’s low rankings nationally in scores on reading, writing and math.

“Why don’t you spend more time focusing on that and less time trying to sexualize little innocent babies, because that’s what they are,’’ she said.

“And you want to put them in makeup and make them drag queens and make them sexualized individuals,’’ Antone continued. “Shame on you!’’

Hoffman insisted that she was not trying to push a specific agenda. Instead, she told those in the audience that she was simply putting forward the suggestions from Quezada for the board to consider.

“I thought this was worthy of discussion,’’ she said. “I would give the same respect to any senator.’’

But former schools chief Diane Douglas, defeated in last year’s Republican primary, accused Hoffman of giving “priority status to your most favorite organization over every other concerned parent that’s sitting in this room today.’’ Douglas did not publicly identify the organization.

She used her first State of Education speech to call on lawmakers to repeal a law that prohibits any courses on AIDS and HIV from portraying homosexuality “as a positive alternative lifestyle.’’ Hoffman, a Democrat, told members of the House Education Committee at the time that the verbiage “contributes to an unsafe school environment’’ and leads to discrimination and bullying.

Hoffman got her wish -- but only after gay rights groups filed a federal court lawsuit and Attorney General Mark Brnovich declined to defend the law.

And the board last month separately repealed an existing rule that had required sex ed classes to “promote honor and respect for monogamous heterosexual marriage,’’ a provision also challenged in the federal court lawsuit and demanded by plaintiffs to drop their lawsuit.

Hoffman, in defending herself Monday, also said that sex ed classes operate on an “opt-in’’ basis, with parents having to give consent.

“That is not changing,’’ she said. “It’s always the parents’ choice of whether or not their child participates.’’

Michael Clark, attorney for the Center for Arizona Policy, separately objected to another proposed change which would have allowed -- but not required -- schools to have co-ed sex ed classes. Madeline Adelman, speaking for GLSEN, said those choices should be left to local school boards.

The board could get some direction from the Republican-controlled Legislature this coming year on what changes, if any, to make.

Sen. Sylvia Allen, R-Snowflake, vowed to propose a law that absolutely forbids sex education of any type before the fifth grade; existing law allows -- but does not require -- schools to provide instruction on AIDS and HIV from kindergarten through Grade 12.

And Allen, who chairs the Senate Education Committee, made it clear she’s not particularly pleased with what is being taught at all grade levels.

“Schools should never be in competition with what parents are trying to teach at home and how they are directing their children,’’ she said. Allen also took a broader swipe at public education, saying it is moving away from instruction and instead to “social engineering’’ of children.

There were other political overtones in the hearing,

Ashley Davis, who said she was a member of the Patriot Movement, complained that 75 percent of teachers in the nation “openly identify when many leftist and Marxist values that are indoctrinating the youth of America with spite for our flag, disgust for our history, hatred for our values but, most of all, violent rhetoric towards our awesome president Donald J. Trump.’’