Williams Fire responds to accidents, house fire in May 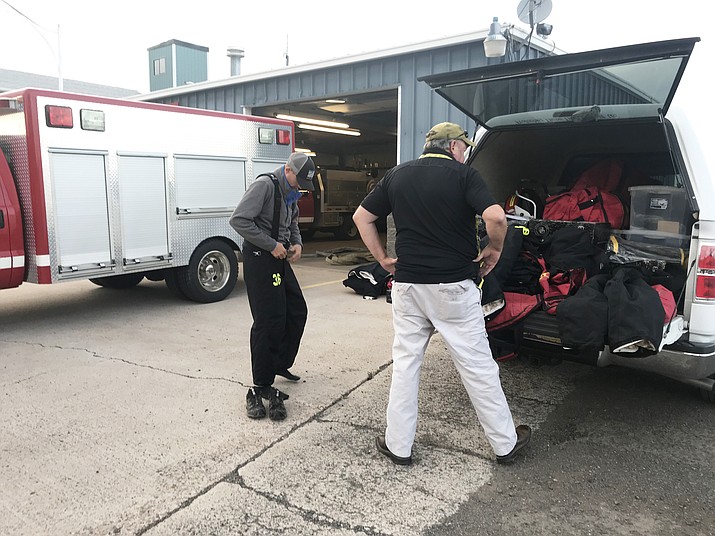 Schulte said the Department of Forestry and Fire Management has severity grants that could pay for 90 percent of the costs if approved. The department’s match could potentially be in-kind or monetary if the city is interested. The current grant cycle is over this year but the department could explore ways to reduce the threat of wildfire on city property and private property that will not be covered by the county or forest service.

WFD responded to the following calls in May:

• May 3, WFD responded to a report of a fully engulfed structure fire on South Fifth Street. Ponderosa and Ash Fork Fire Departments were also requested. Engine 8 staged in front of the structure and an attack line was pulled. Engine 7 staged on Sheridan Avenue. Water supply was established at the hydrant.

No occupants were reported inside the structure, but one animal was lost to the fire.

Once the fire was under control Ash Fork Fire was cancelled. Ponderosa Fire continue for additional man power. Once fire was knocked down, positive ventilation was set up via fan and structure was allowed to breathe.

Ceiling and walls were pulled to ensure there was no hidden fire.

Fire personnel returned three times throughout the night to confirm there was no re-ignition.

• May 7, WFD responded to a single pickup rollover on I-40 eastbound at milepost 169. The vehicle had rolled one to two times and was upright on arrival. Patient was in Lifeline Ambulance care and Arizona Department of Public Safety was on scene. Fire personnel removed battery cables and checked for fuel leaks.

• May 8, WFD were paged out for an overturned Bronco in the waterat milepost 179 South Perkinsville Road. Fire personnel were cancelled by Coconino County Sheriff's Office. Subject had hypothermia; Lifeline was on scene.

• May 11, WFD responded for a female patient complaining of abdominal pain at North Grand Canyon Boulevard. Lifeline had an extended ETA. Patient was assessed by fire personnel. Lifeline arrived and patient care was transferred.

• May 17, WFD was paged for medical emergency for a male subject who had passed out at North State Route 64. Rescue 1 was canceled prior to leaving the station.

• May 22, WFD responded to a call for a carbon monoxide alarm activation on a vacation rental at East Edison. A multi-gas detector was used and found no CO readings. It was determined that a skunk sprayed underneath the house and set off the alarm. Owner was advised of the problem.

• May 27, WFD responded to a report of a rollover on I-40 westbound at milepost 167. Upon arrival firefighters found a blue pickup on its side with no occupants visible inside. CCSO stated that the accident was non injury and to proceed to an accident at milepost 171.

• May 27, WFD responded to a report of a rollover on I-40 westbound at milepost 171. Upon arrival firefighters found a vehicle on its top with a patient self-extricating from vehicle and being loaded into Lifeline Ambulance. Ponderosa Chief 81 was on scene and advised that no other assistance was needed but there were other accidents in the area. DPS requested vehicle be moved out of the way. Rescue 1 was used to push vehicle to gore point.

• May 29, WFD responded to a third party report of a smoke alarm activation going off in the residence on Hereford Avenue. Upon arrival crews found no smoke or flames. Home was vacant and audible alarms were activated. Home appeared to be under remodel and freshly painted with a floor removal. Smoke alarm was reset.

On May 15, Lieutenant Justin Sandoval conducted training for WFD members. Sandoval gave instruction on deploying a modified minuteman hose load with options from that load to deploy a forward lay, v-split and coil load.

WFD will be implementing monthly online training including Blue Card command for officers.

In May, several fire department members took their wildland pack tests in order to receive Red Cards for wildland firefighting.

On May 11, Firefighter Ryan Thibault successfully completed the Firefighter I and II course from Coconino Community College.

On May 15, WFD members were sized for new turnouts.

Two burn permits were issued in May. Additionally, WFD donated $1,000 to the 2019 Grad Night at Williams High School.