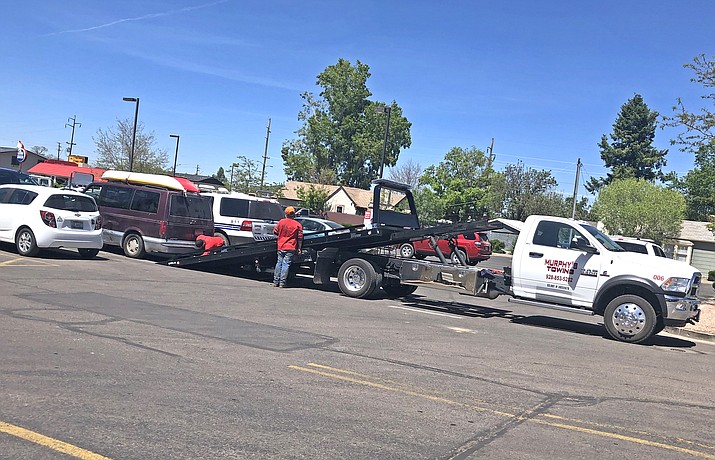 Anthony Kirk Thompson, 40, of Post Falls, Idaho, was arrested on charges of forgery, theft of transportation, flight from police and possession of stolen goods.

Samantha Lee Bonner, 22, was also arrested in connection with the counterfeit bills.

According to Detective Jerry Wilson, officers from Williams Police Department took the initial report from Circle K and were able to get a description of the man.

WPD sent the information out in a community alert and notified local businesses.

During that time, an employee from the Sultana Bar contacted WPD and said they saw someone matching that description heading up Third Street.

Chief Herman Nixon came upon the man, later identified as Thompson, who was driving a motorcycle. Nixon initiated a traffic stop, but the man fled.

Nixon and other WPD officers began pursuing the motorcycle but lost contact with the man as he jumped the curb at a construction zone.

“We lost sight of him for a minute, but citizens figured it out and pointed the direction he was driving,” Wilson said.

Officers found the motorcycle parked behind the Williams Senior Center and bystanders told officers the man had removed his bright orange hoody, headband and sunglasses and was now wearing a dark sweatshirt.

Officers began looking around the Safeway building and parking lot and found a red van that was possibly involved with the incident.

“The van had Idaho plates, which matched the plates of the motorcycle,” Wilson said.

As officers began investigating the red van, a man matching Thompson’s description was observed coming through the parking lot to the van. Officers conducted a felony stop on Thompson and found Bonner with the van.

A report during came into WPD at that time stating camping gear and kayaks had been stolen from Kaibab Lake Campground. The kayaks were found with the red van.

During the arrests, Thompson claimed to be having health problems and was transported to Flagstaff Medical Center by Lifeline Ambulance.

Upon release, officers booked Thompson on the charges and found he had also passed several counterfeit bills at the Flagstaff Medical Center cafeteria.

Wilson believes Thompson had a trail of using fake $20 bills from Idaho to Arizona. The motorcycle was reported stolen and the van had false plates.

The investigation is ongoing.