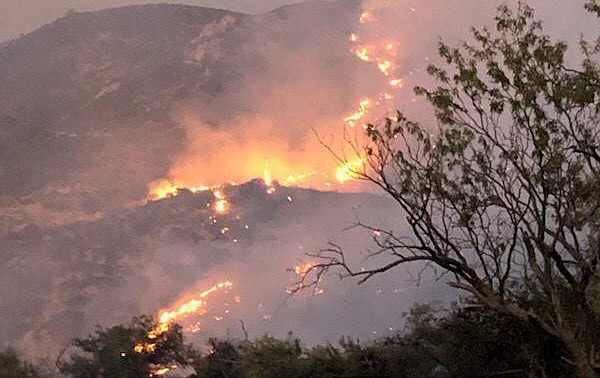 The Woodbury Fire near Superior has burned more than 30,000 acres and remains zero percent contained. (Photo/USFS)

SUPERIOR, Ariz. — A human-caused wildfire in east-central Arizona near Superior continues to grow and remains uncontained.

The blaze that’s been burning for a week now in the Tonto National Forest has charred about 57 square miles (147 square kilometers) of grass and brush in rugged terrain as of June 16.

The fire has tripled in size since June 14 because of hot and dry conditions.

It’s now about five miles northwest of Superior. But authorities say there are no threats yet to the communities of Queen Valley Estates, Gold Canyon, Kings Ranch, Superior and Apache Junction.

More than 720 firefighters and other personnel are assigned to the blaze.

Evacuation order lifted for residents displaced by wildfire
Wildfires burn 45,000 acres across Arizona
250 homes east of metro Phoenix evacuated due to wildfire
Wildland use fires on Tusayan District
Fewer wildfires, but bigger blazes so far this year in Arizona