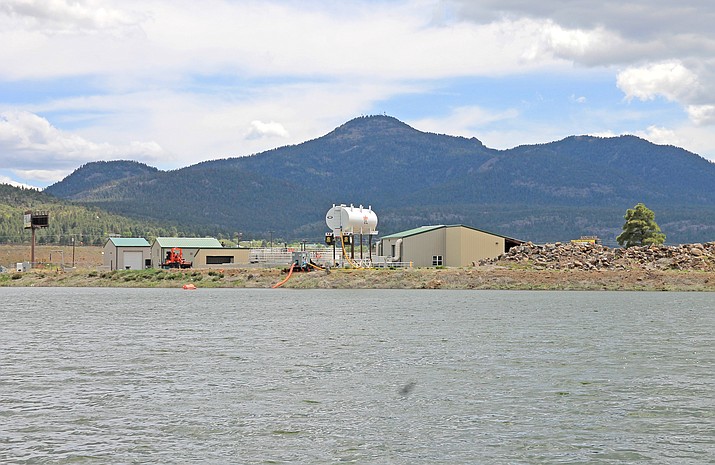 WILLIAMS, Ariz. — The city of Williams continues to adjust and rehabilitate its water and wastewater systems, and the city recently received approval to use the historic treatment lagoons as a holding pond for reclaimed water.

According to city water contractor Pat Carpenter and City Councilman Bernie Hiemenz, the city recently received a reuse permit from the Arizona Department of Environmental Quality (AZDEQ) to allow the city to store water treated at the wastewater treatment plant for irrigation and other projects.

Reuse water had already been used for irrigation at Elephant Rocks Golf Course, but the holding ponds will now allow the city to store additional water for its use.

“Previously, whatever the plant was discharging would go into this tank and the pumps in the vault would push it out to the golf course,” Carpenter said. “The problem was that we would run out because it (the golf course) would use more than we could make.”

In the past, Elephant Rocks Golf Course has used Cataract Lake to supplement irrigation when reuse water wasn’t available.

“They shouldn’t need to get any out of Cataract now, that was the whole point of this project,” Hiemenz said.

Previously when the golf course closed for the season, the reuse water could not be stored and was off-loaded into Cataract Creek.

Carpenter and Hiemenz have been working on developing the reclaimed water pond for several years and after receiving the permit, city crews were able to rehabilitate the area.

“When I first started, Bernie and I had this idea, we take the dyke out and we could use this to store our treated effluent,” Carpenter said. “It took about two years to go through ADEQ to get the permit amended.”

Although all the work was done with city staff, the city purchased approximately $60,000 worth of pumps to facilitate the pumping of the water to the golf course. Those pumps will also be used for another water conservation effort coming soon to the wastewater plant. That project will involve using the reuse water to clean and flush the filters.

Carpenter said conserving water has been a major focus of his work with Williams’ water system.

“When we started working for the city about 5 years ago, they were using 65,000 gallons a day of potable water here at the wastewater plant, so we made some adjustments to the process and only use about 20,000 gallons now,” he said. “But once we get the pump up all the potable water will be in the lab and the rest will be reclaimed water.”

Hiemenz said the plant was designed to use reclaimed water, but the city did not have the money to develop the project until recently.

Carpenter said the wastewater treatment plant can process 900,000 gallons per day, and the holding ponds will hold 13 million gallons.

In addition to use by the golf course, the city has already begun distributing water to Fann Construction for their I-40 repavement projects.