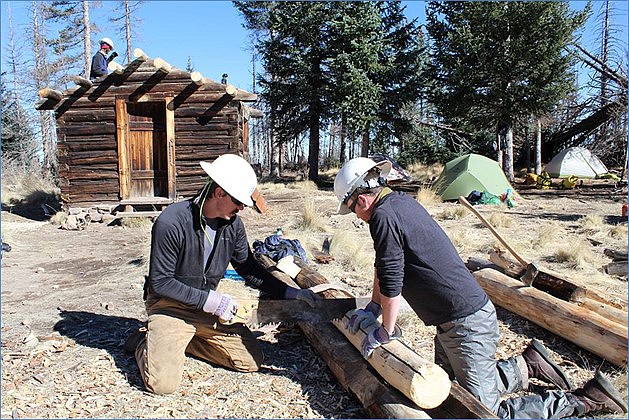 The years-long rehabilitation project is one of the 2019 recipients of the prestigious Governor's Heritage Preservation Honor Awards, which are given annually to recognize excellence in historic and cultural preservation efforts in Arizona. The honor awards are intended to promote public awareness of historic preservation in the state, publicly recognize contributions by organizations and volunteers, and identify heritage projects that demonstrate excellence in design and execution.

"I am absolutely thrilled about this award, which recognizes the remarkable challenges of conducting historic preservation within a high-elevation wilderness area and on a structure that is now 108 years old," said Neil Weintraub, an archaeologist with the Kaibab National Forest. "Our partners and volunteers have worked tirelessly to ensure that Kendrick Mountain Fire Lookout Cabin can be enjoyed by the public for another 100 years."

The cabin, which is located on the Williams Ranger District of the Kaibab National Forest, was built in 1911 and is one of the oldest structures associated with early Forest Service wildfire detection. Seasonal personnel were housed in the cabin until the 1930s, and in 1988 it was listed on the National Register of Historic Places, establishing it firmly as a treasured site to be preserved.

"I first started working on Kendrick cabin more than 33 years ago, so I guess I’m part of history myself now," said Teri Cleeland, former historian on the Kaibab National Forest and the author of the site's

National Register nomination. "Kendrick Cabin is a historic landmark, one of the few human markers in the wilderness, which has served generations as shelter from the harsh mountaintop climate. It has always been a special place where I have felt a kinship with those forest pioneers who looked from the doorway and said, 'This is a place worth saving.'"

While Forest Service fire crews once maintained the cabin by driving or flying materials to the site, Kendrick Mountain was designated a wilderness area in 1984. Preserving a historic site in wilderness added extra challenges for forest managers, as the designation required that all materials be packed in and work accomplished through non-mechanized means.

When a Douglas fir tree fell on Kendrick cabin's roof in winter 2016 destroying five of the six support beams, Kaibab National Forest managers needed to get creative to save the structure. Through partnerships with Northern Arizona University, Davey Mac Studio and Workshop, American Conservation Experience, and many dedicated volunteers, the Forest Service launched an extensive rehabilitation project that would take the next two years to complete.

Forest Service employees, partners and volunteers ultimately carried thousands of pounds of materials and supplies up the steep slopes of Kendrick Mountain.

The project required 16 separate trips, each necessitating a 2,600-foot climb up a 4-mile trail to the cabin.

Partners on the rehabilitation project took care to maintain the original historic fabric and aesthetics of the cabin. The extensive work was documented by Northern Arizona University students on a Facebook page about the project, which has accumulated more than 12,000 views.

Kaibab National Forest representatives and partners will be presented the award at the Preservation Awards Ceremony on June 13.