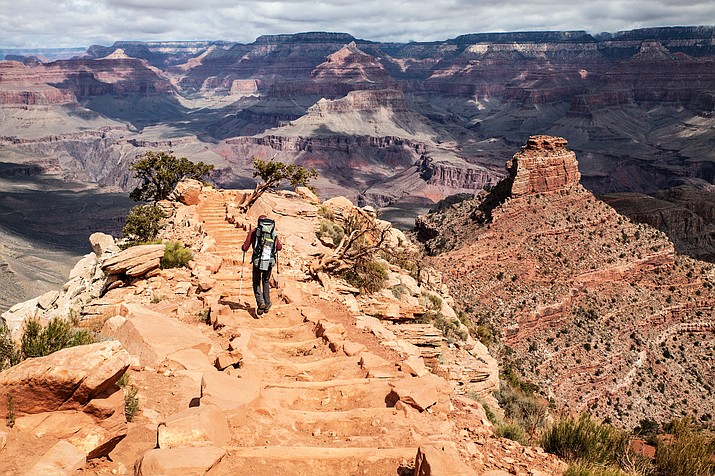 A hiker heads down the South Kaibab Trail. (Stock photo)

GRAND CANYON, Ariz. — What’s the best way to secure a backcountry permit for the Grand Canyon? Reserve it four months in advance and be flexible with your itinerary and start date, according to Dean Reese who has 10 years of experience working in Grand Canyon’s Backcountry Office.

“Those three things — it’s still not a guarantee but that’s the best way to get a permit,” Reese said.

Hikers looking to camp overnight in the backcountry are required to purchase a permit from the Backcountry Information Office. (Loretta Yerian/WGCN)

of North Rim Campground (May 15 – Oct 31) and packrafting, other than that which occurs under a river permit.

Hikers can obtain backcountry permits from four locations: the backcountry offices located on the North Rim and the South Rim of the Canyon and the Bureau of Land Management (BLM) office in St. George, Utah and Pipe Spring National Monument office located 15 miles west of Fredonia, Arizona accept in person requests only.

There are currently three options to obtaining a backcountry permit.

Hikers can call to inquire about availability on certain dates and information but permits can only be obtained by faxing the paperwork (located online at http://www.nps.gov/grca/planyourvisit/upload/permit-request.pdf), mailing the paperwork into the backcountry office or submitting the application in person.

Reese said one of the most important things to keep in mind when securing a permit, especially in person, is that it could take some time.

The park has been working on updating the reservation system for backcountry permits, however, according to backcountry office ranger Nate Powell, that system is still at least a year out.

“We have an online system that is more or less built,” Powell said. “There are some things that need to get worked out still. We’re shooting for fiscal year 2020.”

Powell said the new reservation system would give you options similar to what is now offered but will also help guide visitors to some of the most common areas where most hikers want to be.

“It gives you the options just like it is now to choose whatever kind of itinerary you’re comfortable with,” he said.

Powell said the reservation system will be Grand Canyon specific and any bugs that need worked out would be made a priority.

“We’re hoping it will be soon,” Powell said. “There’s a lot of positive aspects. We can do a lot more rangering and contacting visitors prior to their hikes.”

According to Reese, around 30 percent of their job as backcountry rangers is being on the trails.

“Helping people out — we have a satellite phone, radio, advanced first aid training so when people need help we’re there,” he said. “And just being a presence. People really appreciate seeing us out there.”

“That’s really the place to go,” he said. “They’re going to struggle with that enough … as a first time trip I’d say Indian Garden or Bright Angel Campground.”

Some things to take into consideration for first time hikers is the elevation change, difficulty of the terrain and potential for extreme weather.

As for seasoned hikers, Reese said it is wide open based on their abilities.

Powell and Reese agree the most common question asked is about water — where is it on the trails and is it available at all. Some areas like Grandview Trail and many others may or may not have water.

“That’s probably the question they should be asking and it often is,” Dean said. “That’s literally life and death, if you don’t have water you’re not going to make it.”

One common trend for the backcountry office right now is the number of Arizona Trail hikers. The Arizona Trail is a continuous trail that traverse the entire state of Arizona, including the Grand Canyon.

“That’s the most dramatic change,” Reese said. “When I first started here I could count the number of people that would come through that I would deal with in a season and now it’s daily … it’s really a dramatic increase.”

So why do people want to hike the Grand Canyon?

In 2017, the Grand Canyon Backcountry Office issued 13,853 hiking permits. Only one person needs to make a reservation and hold onto the permit throughout the hike for each group. Group sizes vary, from small groups of one to six people or large groups of seven to 11 people. Therefore the 13,853 permits issued in 2017 only reflects the number of people purchasing the permits.

More information about obtaining backcountry permits and hiking information can be found by contacting the backcountry information center by email at grca_bic@nps.gov, by phone at 928-638-7875 or by visiting the park's website at http://go.nps.gov/1lvc55. The backcountry office is open from 8 to 12a.m. and 1 to 5 p.m. Monday through Friday, excluding holidays.