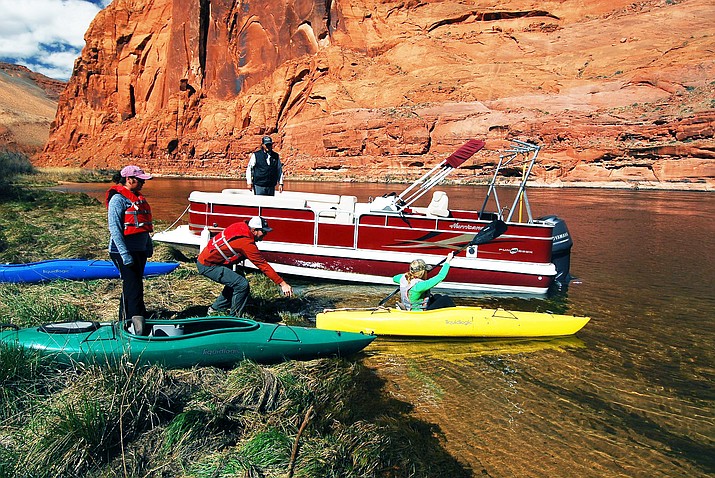 LEES FERRY, Ariz. — A longtime fly fishing outfitter on the Colorado River is now offering a new way to explore the river.

Kayak Horseshoe Bend is a service of Lees Ferry Anglers, a licensed guide service owned and operated on the Colorado River by Terry and Wendy Gunn.

The Gunn’s have operated the fly fishing business along the Colorado River since 1983. They have owned Lees Ferry Anglers since 1989 and in 2001, Gunn and his wife bought Cliff Dwellers Lodge, relocating most of their services to the lodge. Now, Gunn said they are excited to offer shuttle services and kayak rentals on the Colorado River.

“This area is just exploding in popularity, they’re saying something like 2.5 million people a year are coming to view Horseshoe Bend,” he said. “A tiny, tiny portion of those people get to see it from the river. We started this business as an opportunity to give more people a chance to escape the crowds and see Horseshoe Bend as very few people do — from the inside out.”

The shuttle service will carry kayaks, canoes and stand-up paddle boards up the Colorado River, 16 miles from the Lees Ferry boat landing to Glen Canyon Dam.

This stretch of the Colorado River — from Glen Canyon Dam to Lees Ferry — is the last remnant of Glen Canyon, the rest is covered by Lake Powell.

“People can show up with absolutely nothing except a water bottle and we can take care of them,” Gunn said.

Gunn said the compnay rents inflatable single and tandem kayaks and hard shell kayaks. They can take up to six passengers with gear and rentals up-river from Lees Ferry to Glen Canyon Dam or any spot in-between for drop-off. Small boaters can then paddle, row or drift downstream.

Rental kayaks or personal boats are loaded aboard Kayak Horseshoe Bend’s 23-foot long shuttle boat for the upstream ride throughout the day. The shuttle boat trip from the Lees Ferry boat ramp through Glen Canyon to the drop-off point is about 30 minutes.

Gunn said typically people start from up river, nearer to the dam and will paddle to Lees Ferry where they will be picked up.

Kayak rentals and shuttle services are offered year-round with launches every day, throughout the day.

Lees Ferry is about a four hour drive from Las Vegas and four hours from Phoenix. A motel, restaurant, convenience store and visitor facilities are near the shuttle launch and watercraft return area. There are also nearby campsites.

There is a $75 per person fee for the shuttle boat service including up to 100 pounds of personal watercraft, luggage and gear with a two person minimum. Rental for an 11-foot single passenger kayak is $25 per day including paddle and required life vest.

More information or to make reservations is available at www.kayakhorseshoebend.com or at (800) 962-9755. Kayak Horseshoe Bend is located at 1408 U.S. Highway 89A in Marble Canyon, Arizona.

According to the National Park Service, there were around 4.25 million visitors to the Glen Canyon area north of Grand Canyon in 2018.

The newly expanded visitor parking area at the Horseshoe Bend Overlook South of Page, Arizona, has reopened. The parking lot had been closed since January to facilitate completion of the project before peak tourist season in Northern Arizona.

The rock formation that towers up to 1,500 feet above the river dates to an ancient desert 160,000,000 years old. What you see today in the Navajo Sandstone are fossilized sand dunes that once swept across the landscape.

Horseshoe Bend is a dramatic example of a geological combination of a canyon and a river bend.

First, a traditional meander was formed as faster moving water eroded the wider or outer part of the river and then deposited the silt on the inside of the river. Over time, this gradual cycle of erosion and deposition bent the river’s path to form a meander.