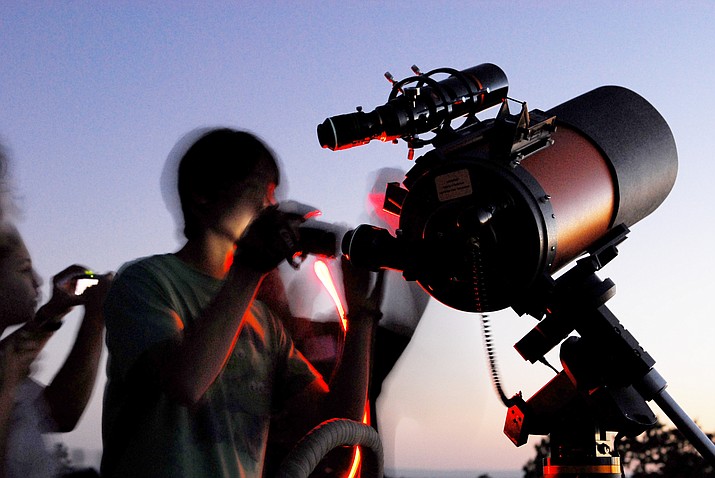 Amateur astronomers from across the country will volunteer their telescopes and expertise for the enjoyment of park visitors. Numerous telescopes will offer views of planets Jupiter, Saturn, Mercury, and Mars, as well as double stars, star clusters, nebulae and distant galaxies-and the Moon, earlier in the week. By day, keep an eye out for solar telescopes pointed at the sun. Weather permitting, expect spectacular views of the universe.

National parks such as Grand Canyon are protective havens for some of the last remaining dark skies in this country. Three years ago, Grand Canyon National Park announced that it received Provisional International Dark Sky Park status through the International Dark-Sky Association. Provisional status gave the park three years to retrofit two-thirds of the lights in the park to be night-sky friendly.

This year, the National Park Service celebrates Grand Canyon National Park's full designation as an International Dark Sky Park, having completed the retrofit requirements in May 2019. We also celebrate the park's 100th anniversary and the 50th anniversary of the Apollo 11 lunar landing. Grand Canyon was a training ground for the Apollo astronauts where they learned about geological processes before making their epic journey to another world.

To celebrate this confluence of milestones we will host a kick off ceremony on June 22 at 10 a.m. at Mather Point Amphitheater. This ceremony will feature remarks from Grand Canyon National Park leadership, Grand Canyon Conservancy leadership, and International Dark-Sky Association leadership.

During the day on the South Rim, visitors can stop by the Grand Canyon Visitor Center for a variety of activities. Cultural demonstrators will be present all week from 9 am to 5 pm Jr. Ranger Day will take place on June 22 and a film festival will take place June 23-28. Finally, to close out the week, the park will host a Summerfest festival on June 29.

During the evening on the South Rim events include a nightly slide show at 8 pm in the Grand Canyon Visitor Center Theater followed by free telescope viewing and constellation tours behind the building. To guarantee a seat at the slide show, arrive early; doors open at 7:40 pm and the theater has limited capacity. Green-laser Constellation Tours will be offered at 9, 9:30 and 10 pm. Night sky photography workshops will be offered at 10 pm on the 23, 24, 25, 26 and 28 beginning at the Grand Canyon Visitor Center Theater. Parking is available in Lots 1 through 4 (Lot 4 is accessible), or arrive by the free Village Route shuttle bus which runs until 11 pm. Telescope viewing is best after 9 pm and continues well into the night; visitors may arrive any time after dark. A flashlight is recommended for the walk to the viewing area, but white lights are not permitted on the Telescope Lot. Give your eyes time to adapt to the dark, or use a red headlamp.

On the North Rim, telescopes will be set up on the veranda of the Grand Canyon Lodge every evening. Astronomers will also use green lasers to point out constellations. An astronomy slide show will be presented at 8 pm nightly in the lodge auditorium. By day, look for solar telescopes on the veranda and elsewhere. Check the Visitor Center and park bulletin boards for program topics and additional details.

Nighttime temperatures on both rims can be quite cool, even in summer. Those attending the Star Party are encouraged to bring warm layers of clothing. When traveling in the park on the South Rim, it is best to find a parking space and use the free shuttle bus system to access points of interest in the Grand Canyon Village area. For shuttle bus information, visit http://www.nps.gov/grca/planyourvisit/shuttle-buses.htm.

This event is sponsored by the National Park Service, the Tucson Amateur Astronomy Association (South Rim), and the Saguaro Astronomy Club of Phoenix (North Rim), with funding from Grand Canyon Conservancy and in partnership with the International Dark-Sky Association.

For additional information on the Grand Canyon Star Party visit http://www.nps.gov/grca/planyourvisit/grand-canyon-star-party.htm or contact Rader Lane at (928) 638-7641.