APS finds promise in bioenergy at Cholla plant, but who will pay? 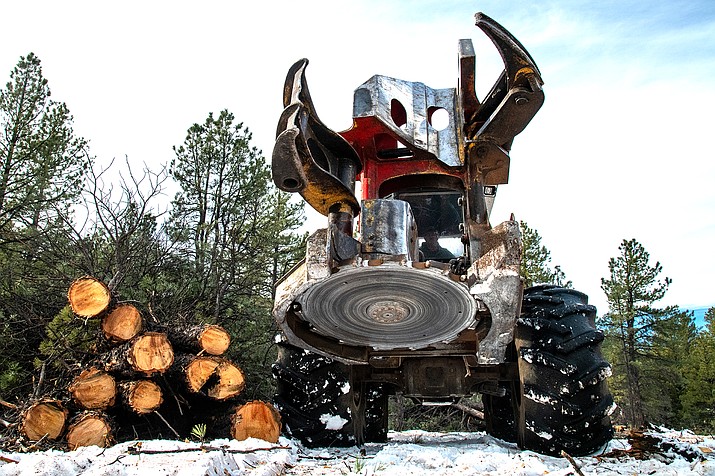 WILLIAMS, Ariz. — The Arizona Public Service Co. has determined the Cholla Power Plant near Joseph City is a feasible option for converting forest biomass into bioenergy according to a report presented to the Arizona Corporation Commission May 21.

“We haven’t heard from the state or any other entities that will step up and deal with these issues, so I appreciate APS coming to us with our request.”

The coal plant is set to close in 2025, and the conversion to bioenergy could not only save jobs, but also accelerate the thinning of Arizona forests in efforts to prevent catastrophic wildfires.

Forest managers and other stakeholders are looking at methods for dealing with a backlog of biomass on northern Arizona Forests. (USFS/photo)

The Forest Service and loggers have said efforts to treat Arizona’s forests are hindered by the massive amount of biomass produced with thinning. Forest biomass refers to pine needles, branches, treetops and small trees that must be removed from a forest during tree thinning, but aren’t marketable in the lumber industry.

At the request of the commission, APS began evaluating the feasibility and cost of converting the Chollla Power Plant in March.

“Converting an existing unit has a number of potential advantages from both a cost and community perspective,” said APS Vice President of Regulation Barbara Lockwood in a letter to the commission.

In December 2018, the ACC adopted a policy to consider the role of forest biomass as a renewable-energy source in Arizona. In March of this year, APS informed the ACC that it was evaluating the feasibility and cost of converting the Cholla Power Plant from coal to biomass.

“We do believe a direct burn of biomass is feasible,” said Jeff Burke, director of resource planning at APS. “We think it is more cost effective than other opportunities that we’ve seen so far.”

APS estimates it would take $135 to $205 million to convert the Cholla plant to biomass, which could get underway immediately.

“We think the potential conversion could happen by 2022,” Burke said.

The conversion would add 83 megawatts of power to the grid and restore approximately 30,000 acres annually.

Using biomass instead of traditional methods will cost $115 per megawatt hour, Burke stated.

Burke said the price of the electricity generated would be two to three times that of solar and other renewables, and that cost would be borne by APS ratepayers.

In addition, the cost of converting the Cholla plant would be borne by APS ratepayers which would be recovered by a Renewable Energy Standard and Tariff surcharge.

Commissioner Boyd Dunn acknowledged the effort APS has put into looking at methods for dealing with biomass.

Kennedy decried the state’s lack of action on dealing with forest biomass and preventing forest fires.

“Ducey wants a billion dollars in his rainy-day fund. What about a smoky day fund to prevent devastating forest fires?” she said. “Despite the numerous forest fires Arizona has experienced since Governor Ducey took office, he has not funded a solution. By not funding a solution to this statewide issue, Governor Ducey has failed to address this important issue as the state approaches the fire season.”

Representatives for the US Forest Service, Arizona Department of Forestry and Arizona Game and Fish Commission have voiced support for using biomass for energy.

“Using this material (biomass) for bioenergy is the only viable disposal option now, and for the foreseeable future,” said Arizona Game and Fish Commission Chairman James Zieler. “Expanding our existing bioenergy capacity is fundamental to completing landscape scale restoration of Arizona forests.”

The ACC did not vote on the issue, but Dunn said he would like to make a formal vote on whether to go forward with the APS proposal at their next meeting.

In 2010, the U.S. Forest Service implemented the Four Forest Restoration Initiative (4FRI) to improve local ecosystems and decrease the potential for catastrophic wildfire events across the Coconino, Kaibab, Apache-Sitgreaves and Tonto National Forests. The goal is to treat 50,000 acres of forest per year through mechanical thinning and prescribed fire, according to the 2017 Four Forest Restoration Initiative Strategic Plan.

The Phase 1 contract is the largest stewardship contract in the Forest Service’s history and has faced challenges with implementation since it was awarded in 2012.

With a goal of 30,000 acres per year, the Phase I contractor has treated just over 12,000 acres to date, including 1,800 this fiscal year, according to forest officials.

The 4FRI leaders acknowledge the struggles with the Phase I contract and are hoping to use the lessons learned as they prepare to open the Request for Proposals for the Phase 2 contract.

Progress on the east side of the 4FRI footprint has moved along faster than the west side of the footprint which forest managers attribute to the proximity of the Novo BioPower Plant and mills in the area.

The cost of hauling biomass from the west side of the footprint, which includes Kaibab and Coconino National Forests, has been a significant problem for loggers.