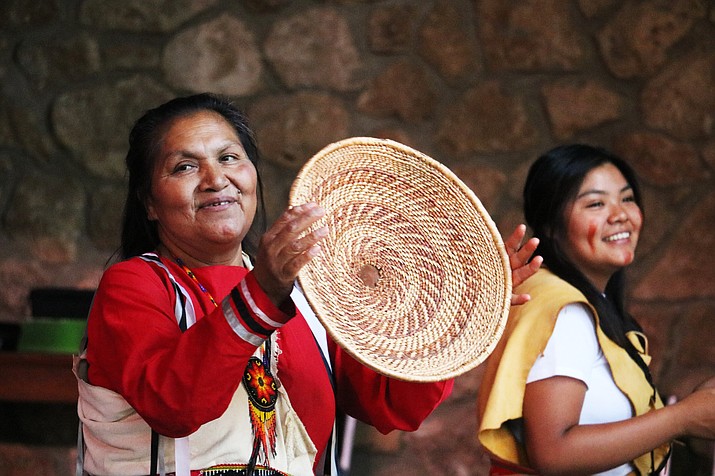 Havasupai's Guardians of Grand Canyon perform dances and share an indigenous history of the Grand Canyon during Rumble on the Rim July 27 at Shrine of the Ages auditorium on the South Rim. (Trevor Ritland/WGCN)

GRAND CANYON, Ariz. — If you traveled to the South Rim of the Grand Canyon July 27 chances are you encountered quite the rumble.

Rumble on the Rim, a day-long event organized by Ed Kabotie, brought together Native American artists, musicians and storytellers from near and far to collaboratively present an indigenous history of the Grand Canyon.

As the lights dimmed inside the Shrine of the Ages, the hum of a flute song welcomed visitors and Kabotie spoke about the conception of the event.

Over the next few hours, stories were played out through spoken word, song and dance, and visitors were offered an inside perspective on the Canyon that many Southwestern indigenous tribes consider to be the most sacred place on the planet.

Kabotie describes the event as “a response to the park's anniversary,” the centennial celebration of a region that was home to indigenous groups long before the arrival of Europeans.

For the last five years, Kabotie has organized the Rumble on the Mountain, a similar event that takes place in Flagstaff.

Havasupai Youth Ram Dancers pose for a photo during the event. (Trevor Ritland/WGCN)

But with the 100-year anniversary of the Grand Canyon National Park being celebrated this year, Kabotie found himself drawn to the occasion. And for him, the Rumble on the Rim began with a question: what does the centennial mean to Native American people?

“Our version of history is probably quite different from the general populations,” Kabotie said. “We also want to tell a story. We also have a very long history. That’s the purpose of the event.”

It’s easy to feel small on the rim of the Grand Canyon, but Kabotie sees those small pieces as part of a larger whole. When those “cultural voices, tribal leaders, and specialists in their communities” all come together, Kabotie said they create a very unique and special opportunity for indigenous voices to tell their own story,” and their voices echo over the rugged earth of the Grand Canyon.

“This is really an unprecedented opportunity for the message of the Rumble to be carried,” he said. “People are getting something for their mind, their heart and their soul.”

Hundreds of audience members filled the auditorium throughout the day; many had traveled long distances expressly for the event, while others came in hiking boots with sunblock still white on their noses — visitors to the Canyon who were drawn in to the Rumble.

Some of the most stirring moments came when the Havasupai Youth Ram Dancers and Guardians of the Grand Canyon invited members of the audience to join them in traditional circle dances, sharing a sacred past. Looking out over the diverse faces, Grammy nominee Radmilla Cody paused between songs to remind the audience of the Navajo concept of kinship — the inclusiveness of all people.

While the Rumble on the Rim event was limited to a six-hour celebration at the Grand Canyon, the public can expect an enduring legacy — and similar events in the future. When people encounter the history and culture firsthand, Kabotie said he hopes for a “total paradigm shift” — a new understanding and appreciation for indigenous perspectives on the history of the Southwest, and for contemporary issues that continue to challenge these communities.

Within the next several months, the event will travel north to Utah for the first ever Rumble on the Mesa — an event to raise awareness about the imperiled Bears Ears National Monument.

Kabotie said he is enthusiastic about the growing community, and has this message for participants: “I hope you’re ready to rumble…”