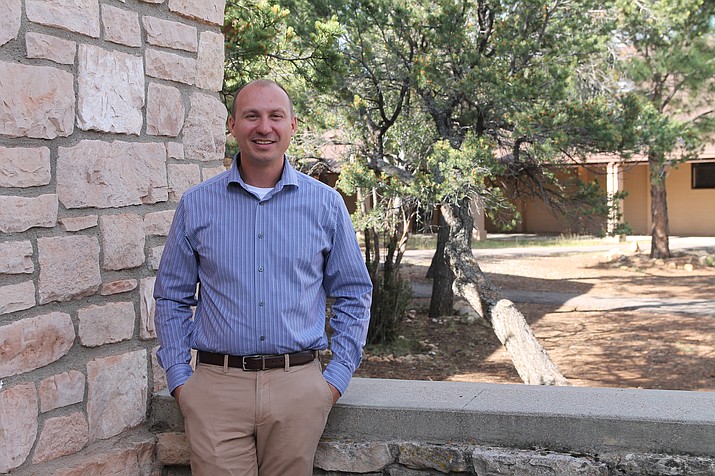 Matt Yost is the new principal at Grand Canyon School. Yost took over from Tom Rowland after his retirement earlier this year. (Erin Ford/WGCN)

GRAND CANYON, Ariz. -- Twenty-four years ago, Matt Yost made his way from Pittsburgh, Pennsylvania to the Grand Canyon with a group of fellow teacher hopefuls. He fell in love with the school and the community and hasn’t looked back since.

Initially, Yost wasn’t on track to teach at all. He was pursuing a degree in architecture from the University of Pittsburgh and had several years of experience in the food service industry from family members in the restaurant business and TGI Friday’s. The half of his family that wasn’t in food service was in teaching, Yost explained, but he had decided early on that he wasn’t going to go that route.

“I had a bunch of friends who had teaching certificates but were unable to find jobs in Pennsylvania. We heard Arizona was desperate for teachers,” he said. “Six of us came out here, and I’m the only one who stayed in Arizona.”

Even though he still wasn’t sold on the idea of teaching, Yost was hired on at Grand Canyon School as the food service manager. He ran the food service program and built the free and reduced lunch program from the ground up. He also oversaw the construction and design of an additional kitchen. A handful of students who were having disciplinary issues or who weren’t fitting in with the culinary arts curriculum were sent to him to work in the kitchen, Yost said.

“They started to make me a teacher before I even really was a teacher,” he said. “When the culinary arts teacher resigned, they came to me and asked me to be a full time teacher as well.”

By that time, he was running the food program, teaching culinary arts, marketing and career exploration and overseeing CTE while coaching several sports.

As Yost prepares to start his first year in the role of principal, he said he is grateful for Rowland’s mentorship, whom he worked with during his four-year tenure. Yost shadowed Roland through daily activities, sat in on parent and stakeholder meetings, became involved in the scheduling process and did teacher observations.

“I’ve had the opportunity to be mentored in this position while still working in the business office and being the assistant superintendent,” Yost said. “In a way, I’m going to continue all the hard work that he (Rowland) did.”

It’s a convenient transition, Yost said, because he already knows the ins and outs of both the school and the community, rather than someone new coming in and have to acclimate themselves to both. He’s also very familiar with the student body, which will help keep things stable in a school that has struggled with high turnover in the past. Yost said Roland also encouraged him to go back to school for his master’s degree in school administration, which he did.

“I’m humbled that they thought I would be the right person to lead the district after Mr. Roland left,” he said. “I really appreciate the opportunities that this community, this (school) board, Shonnie (Bria) and Tom have been willing to take on me. I’ve got a vested interest and I want this school to be great.”

Connecting with the kids

Although Yost said he was fortunate to learn many different aspects of school leadership in a small district, he’s most excited about getting back to the business of working directly with the kids.

“When I was in the district office, I didn’t really get to connect with the kids,” he said. “Coming from the food service side, the teaching side, the athletic director side, I was always interacting with the kids, and I’m really excited to be part of that piece again.

To Yost, it’s always been about the kids. Otherwise, he said, there’s no reason to be there.

Yost said his biggest goal is to continue to improve the school district as a whole while supporting the teachers.

“My thought process is everyday I’m helping us get better,” he said. “Every day I’m asking questions, saying ‘Ok, that was great what we did yesterday, but what can we do today that’s going to make that better?’”

Yost said the leadership team has a few changes in mind and is looking forward to working with the teaching staff on some new ideas.

“During orientation for the whole staff, we’re really going to have a chance to look at all of our systems and procedures and evaluate them to see how we can make them better,” he said. “How can we go in a direction that’s going to help our students achieve what we want them to achieve?”

Yost said he’s looking forward to engaging the teachers and getting their input.

“I’ve always felt that by enlisting teachers’ help, enlisting teachers to identify problems and solutions where I can support them is going to work better than me identifying a problem and jumping to a solution,” he said. “They’re in the trenches and they see things that I don’t see. I have thoughts and experiences from when I was a teacher, and I can leverage that to help teachers, but I really want to have an open dialogue.”

The school board, faculty and staff are not the only ones happy to have Yost in the principal’s office: Yost said his kids are also on board and excited for him.

Both Arizona transplants, Yost met his wife, Jeannie, at Grand Canyon School, where all their children now attend.

“My kids are excited at the fact that they know which office dad will be in — I wore so many hats before that they couldn’t always locate me at the end of the day,” he said. “They’ve been brought up in a school where their dad has always been involved in some aspect of leadership, so they’ve always seen that. They’re pretty excited for me.”