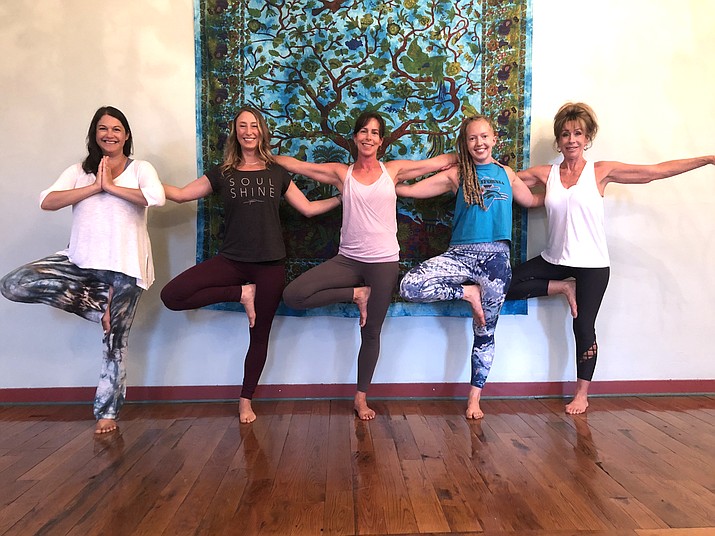 WILLIAMS, Ariz. — Gina Carpenter and Angele Mead are hoping to shake up the summer by adding new classes and new teachers at Grand Canyon Shanti Yoga.

The sisters have been teaching Yoga in Williams since 2016, and moved to their own downtown studio in 2017.

Since then, then Carpenter and Mead have completed over 500 hours of Hatha Yoga teacher training and recently were certified to teach advanced Yoga with a therapeutic emphasis.

Carpenter also teaches gentle Yin Yoga which is a passive practice that involves variations of seated and supine poses held for several minutes.

“It’s a quiet practice where we hold poses for one minute up to 20 minutes at times, although we haven’t gotten to that point since we have mostly beginners,” Carpenter said.

“Vinyasa Flow is a more dynamic, energizing Yoga practice where we move from pose to pose,” Hoffman said. “It’s not holding poses, it’s a little more active with a slowdown and stretch at the end.”

Although Koenig doesn’t teach Yoga, she recently began teaching her fitness classes at the studio. She offers four different classes each week.

“Each class has a different theme,” Koenig said. “We do ball and chair, step, urban rebounding and ball with 15 minute stretch at end. All classes are cardio with calisthenics and core at the end.”

The women began practicing Yoga for various reasons, but all seem to have found a love for it.

“I was apprehensive at first because I was into fitness type stuff and didn’t think Yoga would be hard enough for me,” Carpenter said. “Then I started doing it and realized it was very challenging and the more I did it the more I loved it.”

The women also said the changes they saw mentally and emotionally were surprising too.

“It started with a desire for more flexibility,” Hoffman said. “But then I grew in strength and over time I noticed changes in my mindset and attitude. I found that wonderful feeling after yoga class of peace and the sense that all is right with the world.”

Carpenter said every class can be tailored for beginners to advanced level participants.

“I’d say come in and give it a try,” she said. “We have props here to help modify practice to make poses accessible to all people. Many of my students are in their 50s, 60s and beyond.”