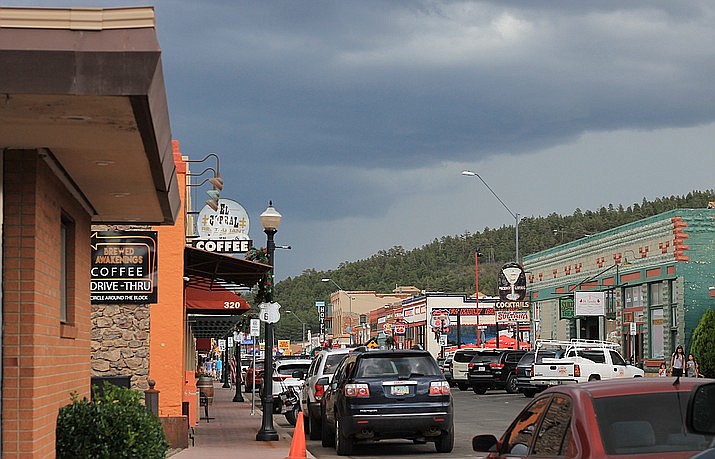 Heavy monsoon storm clouds hang over Williams in 2018. Meteorologists say the 2019 monsoon season can be expected to start late this year. (Wendy Howell/WGCN)

PHOENIX — We’re a month into the monsoon season, and so far, it’s looking more like a non-soon. But the annual weather phenomenon lasts through September, so there’s time for storms to show up with their usual fury.

Arizona is known for its dry heat, but it’s also known for its summertime rise in humidity when prevailing winds shift, bringing moisture from the Gulf of California to southern and central Arizona. And it’s much needed rain, providing nearly a third of the annual total for Phoenix of nearly 8 inches.

So what’s happening this summer?

“To make a long story short, it’s been too dry,” said James Sawtelle, a meteorologist at the National Weather Service in Phoenix. “Apparently the subtropical jet stream has taken a really long time to migrate to the north. So the result is we’ve had a lot of recurring dry, westerly-to-southwesterly flow.”

The weather service defines jet streams — sometimes called “rivers of air” — as relatively narrow bands of strong wind in the upper atmosphere. The subtropical jet stream helps pull moisture into Arizona from Mexico and other areas to the south, Sawtelle said.

Another system, called a heat low, usually has a great effect on monsoon season. The low pressure system is caused by high temperatures and normally originates in southwestern Arizona and southeastern California, pulling moisture from the Gulf of California, Sawtelle said.

In addition, more dry systems have moved in from the west in the late spring and early summer, when the subtropical jet stream would need to start building.

“Thirty percent of our annual rainfall falls during the monsoon season,” Sawtelle said.

The average rainfall at this point in July is 0.38 inches, he said, but Phoenix received zero precipitation in June and has gotten none in July. According to the weather service, the driest monsoon on record was in 1924, with just 0.35 of an inch; the wettest was in 1984, with 9.56 inches.

This late start to the monsoon coincides with the prediction made in early June by the meteorology department at Embry-Riddle Aeronautical University’s Prescott campus.

Meanwhile, those who deal in monsoon preparedness, including Arizona Public Service spokeswoman Lily Quezeda, said the thunderstorms likely will come at some point, and it’s wise to be ready.

“We encourage those who live in the Valley to prepare for monsoon at this time,” she said. “It is going to be here soon, so as we wait for it, we are encouraging folks to prepare go-kits with everything that you think you would need, like flashlights, water, batteries, to really make sure that you have what you need during a potential outage during a storm.”