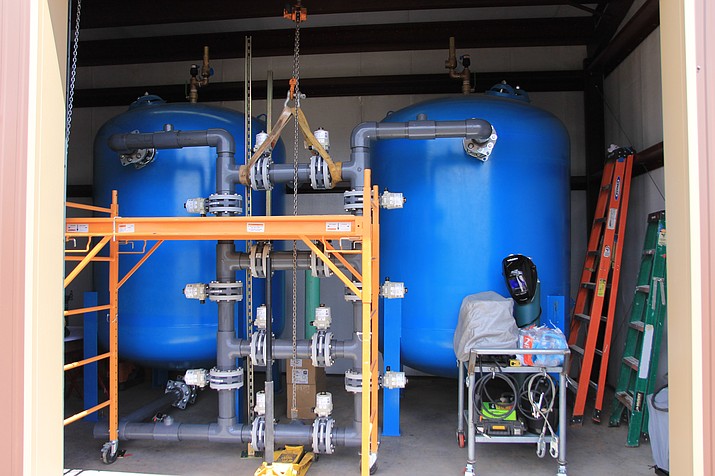 WILLIAMS, Ariz. — The city of Williams continues to fine-tune its new arsenic treatment system for the Rodeo Well north of the city, and residents may notice a change in turbidity and taste according to Williams city water contractor Pat Carpenter.

The city has made a series of changes to improve the city’s water system and storage, with the most recent change the addition of a $250,000 onsite arsenic treatment system for Rodeo Well.

Although the treatment system was installed in May, staff have not permanently placed the Rodeo Well on-line with the city’s water system, Carpenter said.

“We had it online for about half a day to test,” Carpenter said. “Then we had to take it back off-line because we had some issues with the well.”

Carpenter said the water department needs to adjust the pH level in the Rodeo Well water before putting it permanently into the system.

Carpenter said some people interpret the iron taste as sweet or salty.

In addition to the Rodeo Well treatment system, the city also recently dealt with water line leaks in the Quarterhorse Road neighborhood.

“There were a couple water leaks by Quarterhorse, which could have caused some discoloration, some air or some taste,” Carpenter said.

Carpenter said anytime the city has a water leak, staff needs to shut a valve to stop the flow of water while it is being repaired.

“When you open the valve backup, its called a water hammer — the water comes back in and hits the end of the line,” he said. “It then vibrates back and forth and you can get minerals that fall off the pipes.”

Carpenter said people may also see changes to the water as the city switches between using well-water and water from the city’s reservoirs. He said changing lake sources requires the staff to adjust the chemistry.

“We are using lake water now,” Carpenter said. “The Dogtown wells only produce 400 gallons per minute, and the demand is between 550 and 600 (gallons).”

Carpenter said the city tests the water daily under standards regulated by ADEQ and the EPA.

Where is the water coming from?

Currently the city uses Dogtown Wells 1 and 2 and Dogtown Lake as the primary source of water for the city. However, the well water and lake water are combined into one water line that carries the mixed water to the Cataract Pump Station, which is then pumped to the city’s water treatment plant for processing.

When the Rodeo Well is permanently online it will add 288,000 gallons per day, which will run directly into the city’s water distribution system instead of being pumped to the water treatment plant.

Carpenter said the city’s current water demand is 570,000 gallons per day, although in the summer it can get up to 700,000 gallons.

While about 90 percent of the city’s water comes from the Dogtown wells and Dogtown Lake, the city can also obtain surface water from Kaibab Lake, City Dam, Santa Fe Dam and Cataract Lake. The combined capacity of the five lakes is 894 million gallons, although capacity varies each year based on precipitation.

Besides the Dogtown wells, the city has the Rodeo Well, the Santa Fe Well and the partially completed Sweetwater Well