Learning through re-enactment: A visit from Teddy Roosevelt and John Muir 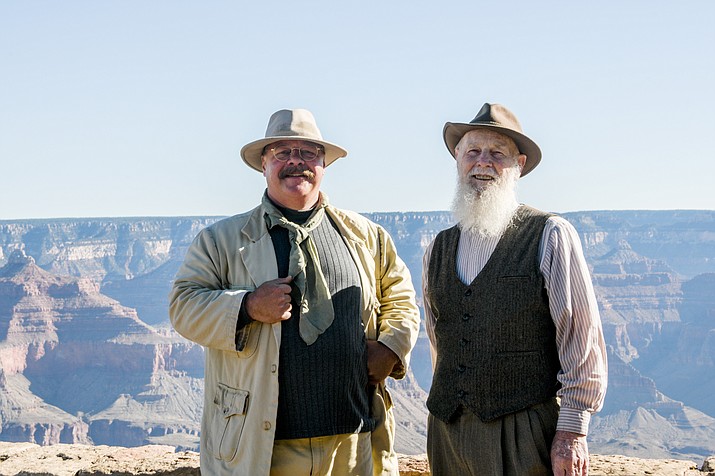 Once at Grand Canyon, Teddy, reenacted by Joe Wiegand, and John Muir, reenacted by Lee Stetsen, began their visit with a very special breakfast in the Roosevelt Room of the El Tovar Hotel on the South Rim of the park. While there, they talked with an interpretation team about working full time in living history reenactment.

Wiegand and Stetsen explained their process in researching historical figures and their experiences working in living history demonstration in other locations. 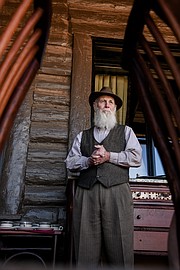 Wiegand said he grew up watching his father, a standup comedian, perform on stage. Wiegand’s family bought a rooming house for performers, writers and artists — he described his father as a hippie comedian and explained how he was the opposite of his father — he was studious, clean cut and enjoyed politics.

Later on, while attending political dinners, Wiegand said he was bored with the speakers and thought he could do better. He began to play a Saturday-Night-Live type character for political events. During this time, Wiegand’s sister gave him a copy of a book about Teddy Roosevelt.

“Books change peoples lives, that one changed me. I began to think, ‘what if I brought Theodore Roosevelt to life, even just a little bit,’” he said.

Eventually his wife, children and dog began traveling in an RV with him and Wiegand began to transform into Roosevelt. On Roosevelt’s 100th birthday, Wiegand was asked to perform at the Whitehouse in Washington D.C.

Stetsen reenacts Muir and describes finding his career as, “a total accident, like most things you bumble on with life until something happens.”

While trying to find work as an actor in L.A., Stetsen found the High Sierra where he could escape Los Angles and go play in the mountains.

“A friend of mine, knowing I was doing this, sent me the biography of this character, John Muir,” he said.

Stetsen was immediately intrigued as he read Muir’s adventures.

Stetsen decided to visit Yosemite and said he was compelled to climb out to Columbia Point and did so upon arrival to the park that night.

“Looking over the valley from the point I immediately went to see about a job as a front desk clerk,” he said.

Stesten worked at the front desk for eight months, saying it was the last real job he ever had, and thereafter started playing Muir and has continued to do so for the last 37 years.

Although living history is not new to Grand Canyon National Park, this year it’s becoming more authentic, according to NPS Ranger Laurel Brierly.

Through a very detailed lecture series, Brierly explained what living history is. She explained that through the educational living history series, designed by Brierly, participants learn about researching character and character development as well as composure, presence and energy, costuming and props, techniques. They also learn how living history and audience centered experiences intersect. This training is new and is part of preparations for Grand Canyon’s ‘Echoes Living History’ event. Brierly hopes it will help raise the bar in what was traditionally offered in the past.

“Moving forward, we’re going to be paying more attention to the labels we use when we define the different forms of performative interpretation in which we engage,” Brierly said. “One of the things that I noticed when I arrived was that many different types of performance were getting lumped together under a header of “living history,” but that actually wasn’t what those performances were and that’s totally fine. There is value in all types of performative interpretation styles. But we have to make sure we call things what they are.”

“We do some living history, but the bulk of our festival programming is scripted theater,” she said.

More information is available from Grand Canyon National Park on Facebook and the NPS event page at www.nps.gov/grca/planyourvisit/echoes-from-canyon.