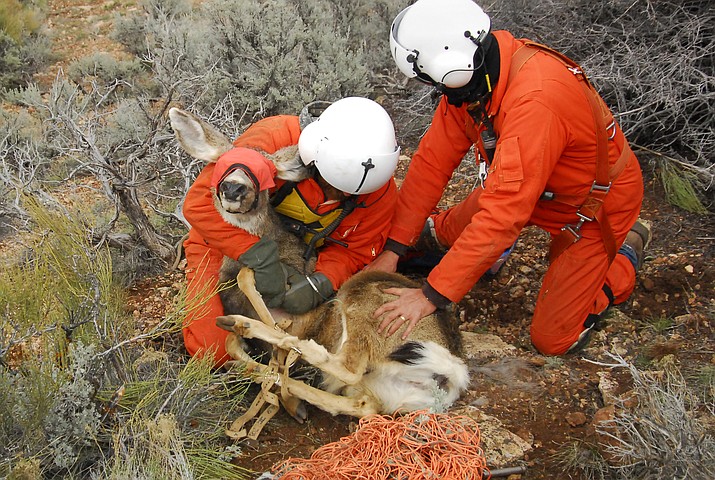 The department — in coordination with the U.S. Department of Interior (DOI), U.S. Forest Service Coconino National Forest, Hopi Tribe Department of Natural Resources and the Mule Deer Foundation — began the study in early June by safely capturing and collaring 20 mule deer around and west of the San Francisco Peaks, just north of Flagstaff.

“Studies such as these are instrumental for us to learn where local wildlife populations move within their natural habitat,” said AZGFD statewide research biologist Jeff Gagnon of the study funded by DOI secretarial order 3362. “This data will guide management decisions to help us conserve and protect local deer populations and enhance the safety of motorists throughout northern Arizona.”

AZGFD officials utilized people on the ground to scout for deer and to guide overhead aircraft (and an awaiting helicopter) toward the herd. Once spotted, the helicopter gave chase and if the net-gunner’s aim was perfect, the animal was immobilized long enough for the copter to land and a handler or “mugger” to hop out.

Once on the ground, the mugger restrained and placed a blindfold on the deer to calm the animal. Biologists then placed an ear tag, took blood samples, its temperature and placed the GPS collar around the deer’s neck, before turning the animal loose to rejoin the herd.

The collars collect and transmit location data every three hours, which provides biologists a wealth of information on daily and seasonal movements that can later be used by traffic engineers and wildlife officials to guide future road projects designed to mitigate wildlife/vehicle collisions. The collars are designed to automatically drop off after three years.

“One challenge in managing wildlife is working to address the impacts that roads, highways, railroad tracks and even fences have on wildlife,” Gagnon said. “Each one these essentially serve as boundaries that can lead to habitat fragmentation. Finding solutions to address such issues benefits Arizona’s wildlife and helps us to make informed decisions to ensure they are around for future generations.”

Mule deer are one of the most-numerous and widespread native big-game animals in Arizona. Adult bucks may stand up to 42 inches at the shoulder and weigh in excess of 200 pounds, while does (females) can average 125 pounds.

More information about Arizona Game and Fish Department management of Arizona’s 800-plus native species is available at www.azgfd.gov.