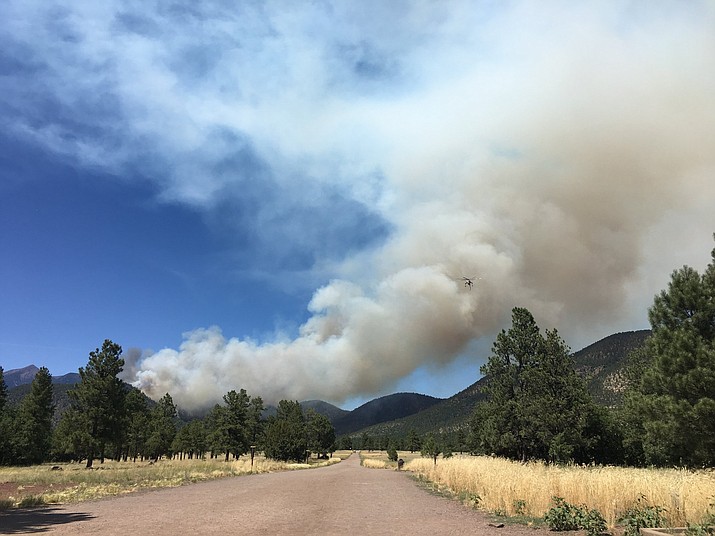 No updates yet on the growth of the Museum Fire, however, pre-evacation instructions have been released by Coconino County Emergency Management.

The following neighborhoods have been identified as the Set Stage (pre-evacuation):

During the Set notification (pre-evacuation), residents are asked to pack any emergency items, have resources to sustain for 72 hours, know how to receive and stay aware of the latest news and information on the fire from local media and community resources.

Coconino Sheriff’s Office and Arizona Game and Fish are stationed in the neighborhoods ready to assist with pre-evacuation notices. Residents can evacuate on their own prior to an official evacuation order.

All areas, including the upper east side neighborhoods of Flagstaff, including Cedar Hills, Shadow Mountain, Christmas Tree, Skyline, Swiss Manor and Upper Greenlaw should be in the “Ready” stage or “prepare now.”

• Be aware of the hazards that can threaten your community.

• Connect with your Emergency Management/Sheriff’s Office on social media.

• Check with your neighbors, family, friends and elders to ensure they are ready.

• Keep up to date on local news, weather watches and warnings.

A call center (928.213.2990) has been activated for people with questions. People are also encouraged to sign-up for emergency notifications for evacuation and other notices at coconino.az.gov/ready.

The fire is located about a mile north of Flagstaff and was reported at about 5 acres at 10:53 a.m. this morning. At approximately 4:30 p.m., the fire has grown to about 400 acres.

An evacuation notice has been issued for the recreational areas of Forest Road 420 to Hwy 89, Mount Elden Lookout, and Schultz Pass Road to private land. Coconino County Sheriff’s Search and Rescue is on-scene and assisting with the evacuation.

A pre-evacuation notice has also been issued for the area of Forest Road 420 to Friedlein Prairie. If people see fire, they are asked to leave the area immediately.

If evacuations occur, Coconino County Emergency Operations Center will coordinate with the American Red Cross to set-up a shelter.

People are encouraged to sign-up for emergency notifications for evacuation and other notices at coconino.az.gov/ready.

Updates about the Museum Fire, acreage, and latest activity will be found daily on Inciweb and posted on the Coconino National Forest Twitter and Facebook social media sites.

CCEM and the city of Flagstaff have activated an Emergency Operations Center in support of the Museum Fire. The center opened at 1 p.m., July 21 and personnel are preparing and coordinating services.

The cause of the fire is under investigation.