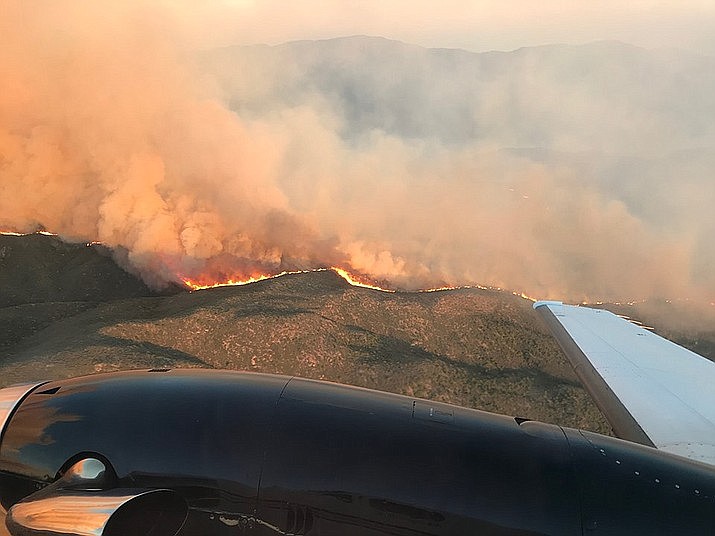 An aerial view of the Cellar Fire, which is burning into ponderosa pine west of Senator Highway as of Wednesday, July 17. (PNF/Courtesy)

The Prescott National Forest (PNF) has upgraded its management of the Cellar Fire, a wildfire that was started by lightning near Wagoner on Sunday, July 14.

Currently at about 7,000 acres, the blaze is beginning to move into ponderosa pine west of Senator Highway, said Debbie Maneely, a PNF spokesperson.

"Unfortunately, this is a part of the forest we have not done any fuels treatment, so there are a lot of fuels in there to burn," Maneely said.

Given the fire's size and potential risk to populated areas, a Type 1 Incident Management Team has been called in to take over the suppression operation. The team is scheduled to take command at 6 a.m. Thursday, July 18.

"They'll have the skillsets, resources, and the folks to look at this and make a strategic suppression plan on it," Maneely said. "Right now we're just using a Type 3 team, which is mostly just local resources except for the hotshot crews that are here."

Crews were able to make good progress establishing an anchor point at the southwest corner of the fire Tuesday night, and ground resources will be working on direct line construction with the use of air support throughout Wednesday, Maneely said.

“As we work on a closure order for the incident, we ask that folks stay off Senator Highway (FS Road 52) and County Road 177,” she said.

As a precaution, the Yavapai County Sheriff’s Office issued a Code Red for the community of Pine Flat. The ‘SET’ alert was issued Tuesday night, but no evacuations are currently in effect. For information on the Code Red issued call 928-771-3321.

To protect firefighters and emergency responders, the following road closures have been implemented on the Bradshaw Ranger District: