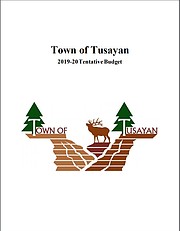 It’s the first time the town has set a budget under Arizona’s expenditure limitation after failing to pass home rule earlier this year.

With guidance from Pat Walker, who is advising the council on how to best comply with the state’s spending limits, the town adopted a tentative budget of $22,281,812 — with the caveat that they may not be able to spend all of it. Walker, however, suggested the town put it in the budget so they could explore other options, such as loans or bond sales, to continue work on capital projects.

The town is limited in the amount it can spend from its general fund, which covers items like public safety, managerial and support services, parks and recreation, legal services and other administrative costs like permitting fees and development planning. Under the expenditure limitation, towns can spend an amount derived from its revenues in 1979-1980, multiplied by inflation factors for subsequent years.

The remaining revenue of just over $3.4 million will be placed in a reserve fund. That fund will continue to grow each year the town operates under the limitation, since the town takes in about $5 million in revenue each year. That leaves the council with a proposed budget of $1,592,466 which, when excludable items are removed, falls within the state’s limitation of $1,414,517. 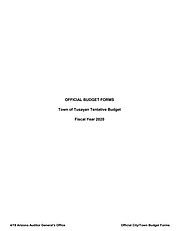 Walker also said some budget items are excludable under state statutes, including grants the town might possibly receive, funds for capital projects acquired through loans or bond sales, Highway User Revenue Fund (HURF) dollars, water acquisition funds and a one-time disbursement from Stilo. The bulk of the $22 million is in the capital funds department, with a potential $17.5 million set aside.

“The capital project funds are excludable because if you go out and take a loan or sell bonds, you can pay it back if you go out for another one-time override or if you do another home rule election in a couple of years,” Walker said. “It’s an alternative so that you couldn’t do absolutely anything on capital projects.”

Town resident Clarinda Vail questioned whether the town had capital projects in mind for the earmarked $17.5 million — projects such as the Ten X housing development or the athletic park that has been on hold for the several years.

Sanderson said the number was a total of the housing development, the sports complex and a few other assorted projects, but said that the projects weren’t being considered as one single expenditure.

“The way the budgeting process works, if we don’t have money set aside for the projects, we can’t consider them,” he said. “A couple small projects might be lumped together, but for the most part they are individual projects. No capital projects will be approved without council discussion.”

Because the town’s daily operations must come from the general fund, the town must hold a public hearing to allow public comment on the proposed budget. The council can make changes by moving money from one department or line item to another, but money cannot be taken from other funding sources, such as the capital projects or grants funds, and placed in the general fund. Because of this, any item where funding is increased must be countered by a decrease somewhere else. So where are these cuts?

One of Tusayan’s largest expenses, a law enforcement services contract with Coconino County Sheriff’s Office (CCSO), has been amended to help the town through the next two years. Instead of the contracted $538,000 per year agreed to in 2016, the town will pay only $250,000 per year with the remaining amount deferred until the town is once again able to set its own budget. Council member Becky Wirth questioned whether it would be better for the town to back out of the contract, which carries no financial penalty and only requires 90 days’ notice.

CCSO’s Lieutenant Brian Tozer said the contract amendment was only the first suggestion of ways to proceed and the department would work with the town to ensure its needs continued to be met.

Among other cuts described by Sanderson as painful, the Kaibab Learning Center would only receive half of its annual allocation as a tuition subsidy for Tusayan residents’ children.

The Tusayan Fire Department, which has previously received annual payroll funding of about $330,000 from the town, would not receive any funds in the proposed budget.

Other funding cuts include no funding for the Grand Canyon Chamber of Commerce or Community Action Grants, no funding for part time staff and steep cuts to parks and recreation and planning and studies.

The only departments to receive increases under the proposed budget is legal services ($10,000) and courts and prosecutor ($15,000). The budget for development and permits remains about the same.

In accordance with the state statutes, a public hearing will be held at 6 p.m. July 31 at Town Hall. The public is encouraged to attend and express any concerns or suggestions. After the hearing, the council will adopt a final budget.