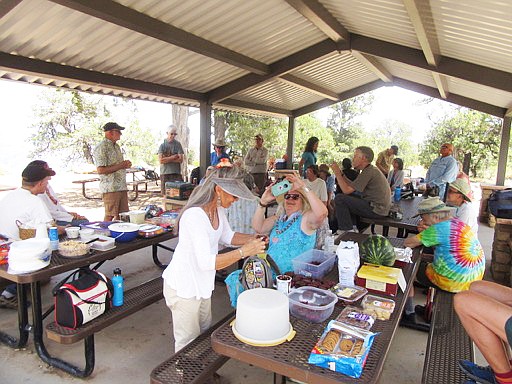 GRAND CANYON, Ariz. — Jon and Suzette Streit were recognized for their many years of service to the Grand Canyon community July 13 during the 20th annual Grand Canyon Historical Society picnic at Shoshone Point on the South Rim of Grand Canyon National Park.

Jon and Suzette Streit receive the 2019 Hall of Fame Award for Community Service from Al Richmond for their dedication to the Grand Canyon community. The award was presented during the 20th annual Grand Canyon Historical Society picnic at Shoshone Point July 13. (Photo/GCHS)

The Streits were recommended for their dedication to the community by previous recipients of the Hall of Fame Award and by current residents.

Erik Berg is presented the 2019 Pioneer Award by Dick Brown July 13. Berg was recognized for his historic preservation activities at Grand Canyon by the Grand Canyon Historical Society. (Photo/GCHS)

“We rely on their recommendations as they know better than anyone who has been involved in community service at the Grand Canyon,” the Historical Society stated in a recent press release. “The recipients have made personal contributions of money, time, support, and/or work over a period of many years.”

He, and his wife Suzette raised their three children at Grand Canyon which led Jon to serve as a High School Booster Club volunteer and to participate in various fundraisers for Grand Canyon School. Somewhere in all of this he also managed to volunteer as an AYSO soccer coach and work to preserve Fred Harvey history with the owners of La Posada and La Fonda Hotels.

Suzette’s 20 years at the Canyon were marked by constant service to the community. In addition to the full time job of raising three children, she volunteered and served the Grand Canyon school in many capacities. This included but was not limited to being a member of the Grand Canyon School Board, PTA, one-on-one reader with the literacy program and participating in various fundraisers for Grand Canyon School. Suzette was recognized for always being a ready volunteer for a variety of Grand Canyon School programs.

“Her service as the High School Booster Club president led her to raising funds for college and sports camp scholarships. She also lent her culinary skills to providing meals for team travel and hosting sports banquets,” the release stated. “The school gym is still graced by several high school sports championship banners that Suzette made.”

Outside of the school, Suzette helped distribute food with St. Mary’s Foodbank during the recent government shutdown and volunteered with El Christo Rey Catholic Chapel. Additionally, her Thanksgiving and Christmas spirit moved her to assemble holiday food baskets for many community members in need.

The names of Hall of Fame Award recipients are engraved on a permanent plaque housed in the Shrine of Ages on the South Rim.