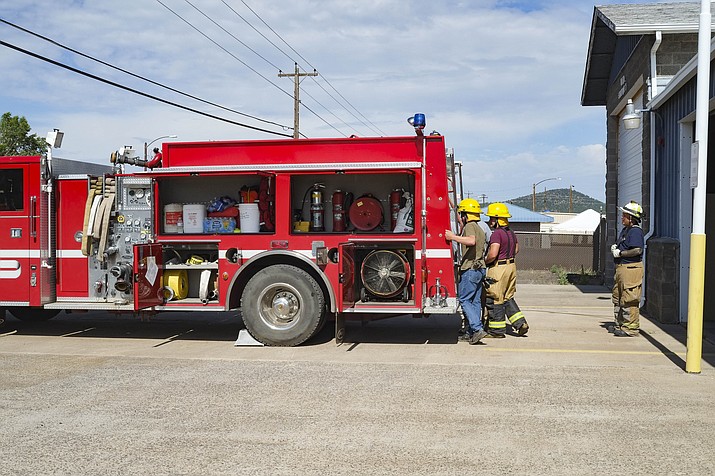 WILLIAMS, Ariz. — Williams Volunteer Fire Department had a busy June, with firefighters responding to a variety of calls.

Williams Volunteer Firefighters Jeff Dent and Jeff Pettit were recognized June 5 for more than 15 years of service with the department. (Loretta Yerian/WGCN)

During the month, Williams Fire welcomed John Moede back to the department as well as its newest recruits, high school students Caleb Burlington and James Eischen.

Jeff Dent and Jeff Pettit were recognized by the department for more than 15 years of service. Dent has served 19 years and Pettit 18 with the department.

On June 30, Williams Fire received 60 cases of bottled water from Family Dollar in Williams. The water was collected through purchased donations by the community.

On June 5, W. Route 66, WFD responded to a smoldering fire inside a sign post. The post had been used for an ash tray for some time and was half full of trash. The street department was contacted to remove the sign to clean out.

On June 11, I-40, WFD was dispatched for a motor vehicle accident with unknown injuries. Firefighters found a black SUV in the median with moderate to heavy damage. All five occupants had self-extricated.

On June 12, E. Warm Springs, WFD responded to a report of an oven fire. Crews found the stove-top fire was out upon arrival. Crews looked for extension of fire on all sides of the stove and found nothing. Power was turned off to the stove and the stove was moved outside and tagged to not be used again.

On June 13, W. Cataract Lake, WFD responded to a call for a fire alarm. Alarm was silenced by hotel staff.

On June 14, N. Grand Canyon Boulevard, WFD was dispatched for a commercial assignment with a report of smoke coming from the vents. Engine 7 and Engine 8 responded. The manager on scene advised the area where the smoke was coming from and crews investigated. A small basket of rags was found smoldering. The basket was removed from laundry room and taken outside for full extinguishment.

On June 14, W. Sheridan, WFD responded to a possible carbon monoxide leak at a residence. Crews found no hazards.

On June 15, W. Cataract Lake, WFD was dispatched for an individual who was having difficulty breathing because Lifeline ambulance had an extended ETA. Crews were cancelled en-route to station.

On June 15, I 40, WFD was dispatched for a possible semi fire. DPS arrived on scene and advised it was a mechanical issue.

On June 21, I40, WFD responded to a single vehicle accident with a report of the driver having a seizure. Two passengers self-extricated. Lifeline and DPS were on scene. Fire personnel secured vehicle power source and inspected for leaks.

On June 24, N. State Route 64 milepost 187, WFD was dispatched for a vehicle fire. Engine 7 arrived on scene to find one vehicle off the shoulder of the highway, nothing showing. Engine 7 met with sheriff’s office and was advised that officer had knocked the fire down with a personal fire extinguisher. High Country Fire arrived on scene and assisted with another personal fire extinguisher. Engine 7 checked vehicle for hot spots and cooled areas with a water can.

On June 24, E. Rodeo Road, personnel responded in a personal vehicle to a passenger having chest pains. Fire personnel began checking stats and contacted lifeline. Patient was not transported — they requested to go to Flagstaff Medical in their personal vehicle.

On June 25, W. Morse, WFD responded to a smoke alarm activation. Engine 7 arrived on scene to find nothing showing, occupants were evacuated. Crews met with occupant who advised alarm had been going off for 30 minutes and called for assistance. Activated alarm was found in children’s bedroom. No smoke or gas was found throughout home and normal readings were made on gas detector.

On June 29, S. Clover Road, WFD was paged out for the activation of a fire alarm. Crews found there was a malfunction with the sprinkler suppression system with a small amount of water leaking on the pressured side — system was still functional.

On June 19, Lieutenant Justin Sandoval conducted training on firework safety and planning. Sandoval gave instruction on safety during the show and demonstrated proper methods of loading and lighting shells.

WFD will again partner with the American Red Cross and other safety partners to install smoke and CO alarms in Williams from 8 a.m. Aug. 17.