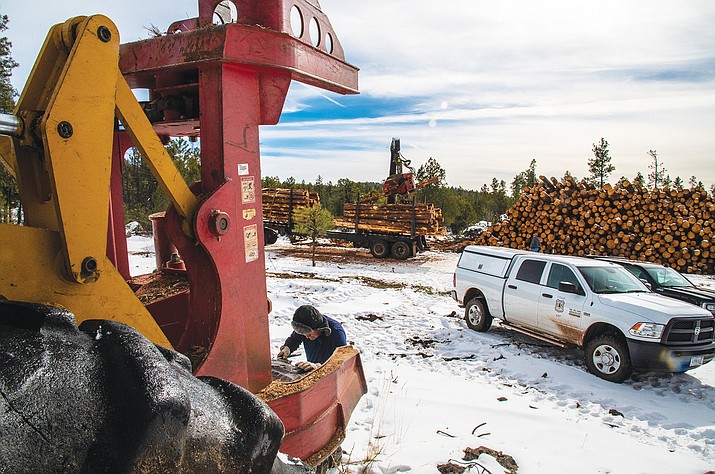 A contractor works at the Isham Task Order work site in Kaibab National Forest in December 2018. The U.S. Forest Service has recently announced the opening of the RFP for Phase 2 of 4FRI. (KNF/photo)

The same day, the U.S. Forest Service announced it was opening up a request for proposals for Phase 2 of the Four-Forest Restoration Initiative (4FRI).

Before the vote, Dunn said he was aware that the APS proposal was not adequate for several commissioners, but said he felt that voting against the proposal would send the wrong message to people.

“My concern is the message it sends out, from my perspective, is that we are still not open to proposals,” he said. “It has been so hard to just get one response over these years to deal with these issues.”

Bioenergy as a solution?

In December 2018, the ACC adopted a policy for utilities to consider the role of forest biomass as a renewable-energy source in Arizona. In March of this year, APS informed the ACC that it was evaluating the feasibility and cost of converting the Cholla Power Plant near Joseph City from coal to biomass.

In May, APS determined the Cholla plant was a good option for converting forest biomass into bioenergy, estimating it would take $135 to $205 million for the conversion, and $2.5 million for initial engineering studies.

The conversion would add 83 megawatts of power to the grid and restore approximately 30,000 acres annually.

However, in the proposal, the cost of converting the Cholla plant would be borne by APS ratepayers, which several commissioners believed unnecessary.

“The policy said at little to no cost, and that was not what I heard today,” Kennedy said at the July 10 meeting. “I’m fine if APS wants to go out on its own and come back with another alternative, I’m sure there are other alternatives out there.”

Olson said he was not comfortable with the proposal and the timing was not right for a vote since the commission had just heard of the presolicitation notice for Phase 2 of 4FRI.

“We should wait and see what solutions are brought forward,” Olson said. “There may be innovative solutions that none of us have considered that will create a solution for the biomass.”

Olson suggested waiting to see the results of the RFP and allow the commission to reevaluate whether the APS proposal was an appropriate process to undertake.

“If that is the appropriate process to clear the biomass through generating electricity, then we should have a discussion with our partners in the state legislature who have the authority to spend state funds on general appropriations,” he said. “They can do that even without raising taxes.” 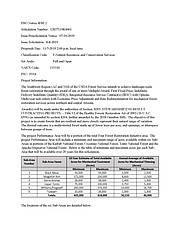 During the July 10 ACC meeting, 4FRI Chief Executive Jeremy Kruger announced the forest service had just opened a presolicitation notice for Phase 2 of 4FRI, and that the RFP would open August 8.

Forest restoration stakeholders, state officials and other entities have been eagerly awaiting the release of the Phase 2 RFP to help accelerate thinning in Arizona forests.

In May, Senator Kyrsten Sinema (D-AZ) said she was dissatisfied with the Forest Service’s progress in efforts to restore Arizona forests and released a statement urging forest officials to open the second phase of 4FRI soon.

“Phase 2 RFP offers the Forest Service an opportunity to learn from past mistakes and get 4FRI back on track,” she said in a prepared statement.

The Forest Service’s presolicitation contained new details from the RFP, including actual boundaries and acreage that will be available.

The performance area is a portion of the overall 4FRI project area. At full production, the contract holder will seek to mechanically thin between 605,000 and 818,000 acres over 20 years in Kaibab, Coconino, Apache-Sitgreaves and Tonto National Forests

The RFP requires detailed technical, financial and business proposals from bidders that demonstrate understanding of the available wood supply, biomass treatments and the project area’s physical and economic operating conditions.