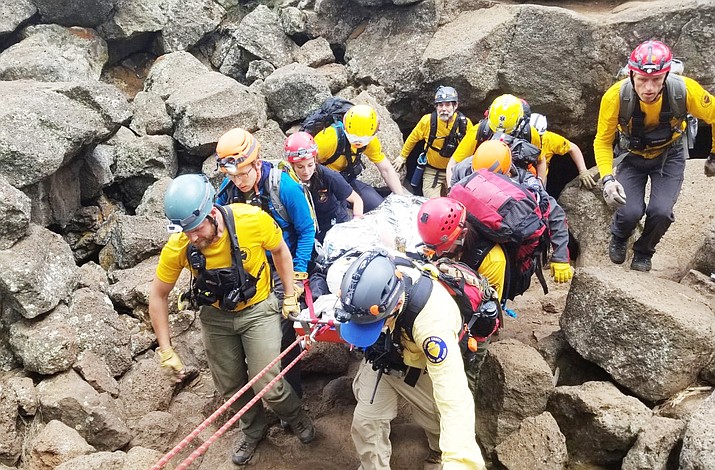 FLAGSTAFF, Ariz. – On July 13 at approximately 11:55 a.m., Coconino County Sheriff’s Search and Rescue (CCSR) responded to the Lava River Caves located off Forest Service Road 171 for a technical rescue of a 43-year-old female who sustained a possible hip injury from a fall.

An injured woman is removed from the Lava Caves, located off Forest Service Road 171 west of Flagstaff July 13. (Photo/CCSO)

CCSR with the assistance of Guardian Medical and Ponderosa Fire Department responded to the Lava Caves after receiving a call for a woman, from Phoenix, who had fallen and sustained a possible left hip fracture. Due to the injury the patient was unable to walk out. Rescue units arrive on scene and removed the patient by technical rescue and a basket carry out at 2 p.m. The female was then transported to Flagstaff Medical Center for her injury.

Due to rocky and slippery conditions inside the cave the patient slipped and fell causing her injuries. The Sheriff’s Office reminds all visitors to wear proper footwear, warm clothing and lighting when traveling in the Lava Caves.

CCSO would like to thank Guardian Medical and Ponderosa Fire District for their assistance in this rescue.