Arizona quakes are mostly minor, but hundreds happen every year 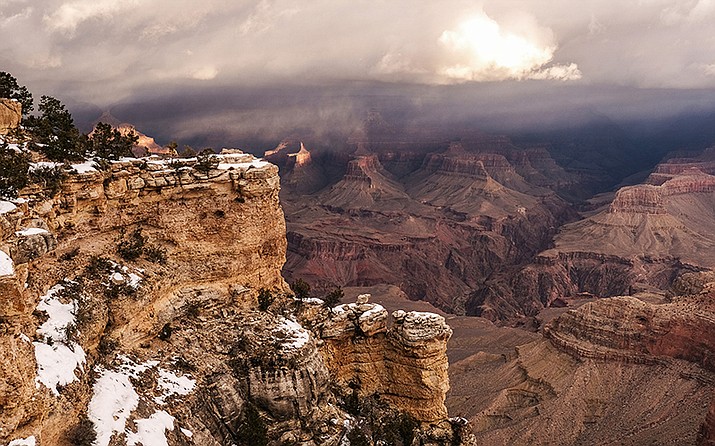 Arizona has hundreds of quakes and tremors each year, many of them near the Grand Canyon, but most are imperceptible to humans. (Photo by Chloe Jones/ Cronkite News)

PHOENIX – Residents of Kingman, Surprise and Phoenix took to social media July 5 to share images of water sloshing in pools, lights swinging from ceilings and more, thanks to a strong earthquake in south-central California.

The July 5 quake near Ridgecrest, California, measured 7.1 on the Richter scale and followed a 6.4 magnitude temblor July 4 in the same area of the Indian Wells Valley.

Arizona is no stranger to earthquakes, according to the Arizona Geological Survey, with hundreds detected each year. Three notable quakes have occurred since 2005 – the last was a magnitude 4.1 temblor near Black Canyon City in 2015 – but most are so small they’re imperceptible.

One of the largest happened in 1887 – a magnitude 7.6 earthquake on the Pitacycachi fault south of Douglas that killed nearly 60 people and was felt as far away as Phoenix, according to the Arizona Geological Survey’s website.

The July 5 temblor was recorded 361 miles away at Arizona State University’s School of Earth and Space Exploration, where Ramon Arrowsmith is a professor. Whether an earthquake can be felt depends on magnitude and proximity, he said. The smallest quake someone will feel is 3.0 – if they’re standing on the epicenter.

“We have earthquakes in Arizona, but they’re usually small, so they’re not usually felt,” he said.

Most Arizona quakes happen north of Flagstaff to the Utah state line and along the Colorado River near Hoover Dam. About 100 faults – areas of weakness in the Earth’s crust where movement will trigger earthquakes – are considered active in Arizona according to the Arizona Geological Survey. A seismic belt runs northwest to southeast in a diagonal line across the state.

“Our earthquake hazard is low compared to California, but it’s non-zero,” he said.

Arrowsmith said scientists can’t predict when an earthquake will happen, but they have an idea.

“The most likely thing is another magnitude 4, magnitude 5 in central Arizona, which is just big enough to get everyone’s attention. It doesn’t tend to cause a lot of structural damage,” he said.

One of the best ways to prepare for an earthquake, Arrowsmith said, is to secure heavy items, like televisions, bookshelves and water heaters, that could fall and cause harm.