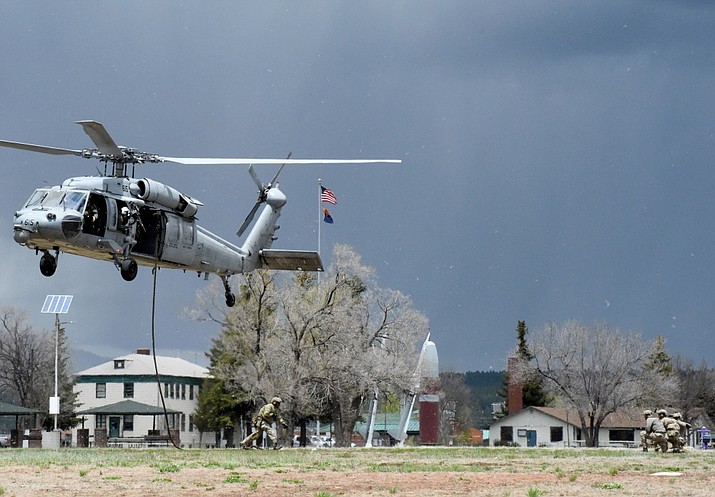 Members of 7th Special Forces Group load an MH-60S Seahawk, flown by members of Helicopter Sea Combat Squadron Six, while rehearsing for an air assault mission as part of an exercise with Red Flag Rescue, the world’s biggest air combat training exercise. Red Flag Rescue brought service members together from all branches and components of U.S. service, and even some foreign military members, for three weeks of training in May at Camp Navajo. (Photo/Major Amanda Hammond) 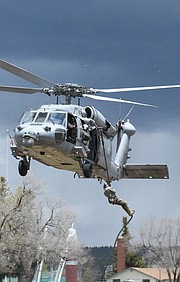 A Soldier assigned to 7th Special Forces Group rehearses fast-roping techniques in preparation for an assault exercise at Camp Navajo, Ariz. May 10th. The MH-60S Seahawk, flown by members of Helicopter Sea Combat Squadron Six, was just one of many air platforms used in Red Flag Rescue, the world’s biggest air combat exercise including multiple branches of the U.S. and foreign militaries. (Maj. Amanda Hammond/photo)

CAMP NAVAJO, Ariz. — It’s seven in the morning, the sun is still cresting over the pine trees at Camp Navajo, and a light rain is falling. Inside brick company headquarters buildings, men assigned to 7th Group Special Forces strap gear onto body armor and check radios. Chatter is light. The men move purposefully, but unhurried. The mood seems strangely peaceful for less than a dozen men preparing for a rapid assault mission.

“Yeah, we’re calm,” says Warrant Officer Wilfredo. “We usually are. That’s how it should be when you’re prepared.”

Meanwhile, about 30 miles away, Sgt. 1st Class Jon drives a white SUV down I-40 toward the objective. Normally he would be kitting up along with the rest of the team, but today he is the mastermind behind the exercise scenario that his Operational Detachment will have to face. Jon smiles beneath a black fleece cap grinning through red stubble.

“I can’t wait to see how they react to what I have in store for them,” Jon says.

The team is taking part in Red Flag Rescue, the largest air combat training exercise in the world which involves multiple air platforms from all branches and components of U.S. Service, as well as foreign militaries, exercising together in the most realistic training conditions the military can provide without being in actual combat. Over the course of three weeks, members of 7th Special Forces Group harnessed air power from the U.S. Air Force and Navy to complete rapid infiltration and exfiltration, airdrop resupply, air insertion, and rescue missions.

Leadership from 7th Group at all levels said the training was outstanding, and provided some of the best opportunities imaginable to prepare for combat. Lt. Col. Patrick Toohey, Commander of 3rd Battalion, 7th Special Forces Group, said this type of training is imperative to allow his Soldiers the opportunity to train together on collective tasks that are essential to the success of any deployed mission.

“Red Flag gives us the opportunity to work with joint and interagency partners to address all of our mission essential tasks. Each part of the exercise builds on each other and gives us a chance to test our training with our partners,” Toohey said. “This is part of our combat pipeline. It gives us the chance to be fully focused on our mission.”

Chief Warrant Officer 4, Jose Villarreal, senior Warrant Officer for 3rd Battalion, agreed with Toohey. He also said the support of the Arizona National Guard and facilities offered by Camp Navajo were superb for the type of training 7th Group needed to conduct with Red Flag.

“Navajo provides isolated, off-the-grid opportunities,” Villarreal said. “The terrain, the altitude, the flexibility — all helped us tailor our training to exactly what we need.”

Soldiers from 7th Special Forces Group prepare to board a C-130 flown by the 211th Rescue Squadron, a unit of the Alaska Air National Guard, after completing an assault and recovery operation during Red Flag Rescue. Red Flag Rescue is the biggest air combat exercise in the world, which involves multiple air platforms from all branches and components of U.S. service, as well as foreign militaries, exercising together to prepare for real-world combat operations. (Maj. Amanda Hammond/photo)

Back in the rented white SUV, Jon continues driving down old Route 66 and passes a bronze statue of a guitarist standing on a corner in Winslow, Arizona. Deep in thought, going over every aspect of what he has templated for the team, Jon steers the vehicle closer to the assault objective and explains how game theory helps him craft training scenarios for his teammates.

“I am a nerd!” Jon exclaims. “I mean a big, big nerd. Like I play D&D on the weekends. But I think that’s what makes me good at scenario building. Being able to take in historic enemy tactics and a firm understanding of my teams capabilities helped me to put together the best product possible with what was available. It’s always tough to be on the outside putting these exercises together when I’d rather be with the team. But I know they will put one hundred percent into this and I’ve got to give them the most realistic experience possible.”

At the objective, six Air Force Reservists wait with weapons in hand to defend their stronghold and prevent the incoming team from rescuing their captive, an enemy defector with intelligence the team can use.

“I don’t know what to expect,” one of the opposition forces role players says as the sound of C-130 engines roars overhead. “I hear these Special Forces guys move fast, but I don’t know how fast.”

The opposition forces role players watch as a C-130 flown by the 211th Rescue Squadron, a unit of the Alaska Air National Guard, lands about a mile away. Rapid assault vehicles roll down the loading ramp laden with Special Forces soldiers and guns loaded with stinging simulation rounds. In the space of a few heartbeats they are storming into the aircraft hangar. In a few minutes the enemy is neutralized.

Outside, the C-130 lands again and the team is ready to load their patient. The entire assault took about 15 minutes.

Back in the white SUV, on the way to conduct an after action review with the team, Jon is elated as he checks in with his wife and plans a future mission — his son’s fourth birthday party.

“In this profession you have to take advantage of every moment with your family. When your days in the Army are over, they are the ones that will keep you grounded and on the right path,” Jon said.

Master Sgt. Bernardo, Team Sergeant, agrees. He says that when the team isn’t deployed, they are often training and he counsels his guys to make time for their families and themselves when they’re not on mission.

Staff Sgt. Andrew, Sgt. 1st Class Jay, and Sgt. 1st Class Jeff, all Soldiers assigned to 7th Special Forces Group, participate in mission planning with members of Helicopter Sea Combat Squadron Six prior to rigorous fast-rope rehearsals designed to help both teams successfully infiltrate enemy terrain during Red Flag Rescue. Red Flag Rescue is the world’s premier air combat exercise and provides an opportunity for teams from all components and branches of the U.S. Military, as well as foreign allies, to train together and fine-tune procedures that will be used in combat. (Maj. Amanda Hammond/photo)

“You have to keep things in perspective,” Bernardo says. “At the same time, Red Flag is a great reminder why we train as hard as we do. During this exercise we get a great opportunity to work with multiple air crews who may not be used to working with Special Forces. We are establishing procedures for working together and the benefit of training as hard and as often as we do shows.”

Over the course of the next week, the team conducted two additional training missions including a night operation to assault an enemy-held observation post and the rescue of two isolated persons behind enemy lines. In total, the team spent three weeks exercising at Camp Navajo and the surrounding area getting accustomed to the unique terrain and honing their combat skills.

For the first week, the team conducted rigorous physical fitness challenges to get acclimatized to the altitude. This training included a march up Bear Jaw Loop, a trail near Flagstaff that starts at 6,000 feet above sea level and ends at 11,000 feet above sea level. Even in May, the team ran into snow deep enough to cover the trail and force them to use all of the navigation equipment and skill they had available. Sgt. 1st Class J, Senior Communications Sergeant, said the harsh terrain was a great equalizer and closely simulated high altitude locations where his team could be sent.

“This whole exercise was an awesome experience,” J said. “But Bear Jaw Loop was life changing. It brought us together and made me really proud of our team and what we are capable of.”

“The guys did great,” said Capt. Victor, Team Leader. “The way these scenarios were planned for us, we had no idea the extent of what we would be getting into, and they performed phenomenally. They responded exactly the way they should have and I think it showed our leadership that we are ready for our combat mission.”

“Red Flag was great, and Camp Navajo is legit,” Bernardo said. “It’s a low-cost venue that does a great job replicating the situation in Afghanistan. I’d say it’s an excellent venue for any Special Forces Detachment to train.”

“The command team at Camp Navajo was just amazing,” Victor said. “The things they allowed us to do, and the way Red Flag is set up, it provided an awesome training environment.”

For J, and other members of the team, Red Flag Rescue was a proving ground where men of 7th Special Forces Group could test themselves.

“To be honest, I thought we performed even better than we thought we would,” J said. “I mean, it’s one thing to feel confident about your expertise and training, but to have other entities gauging your effectiveness during challenging circumstances, that’s the kind of validation we need that we are as ready as we thought we were.”