Navajo artist adds a splash of color to Route 66 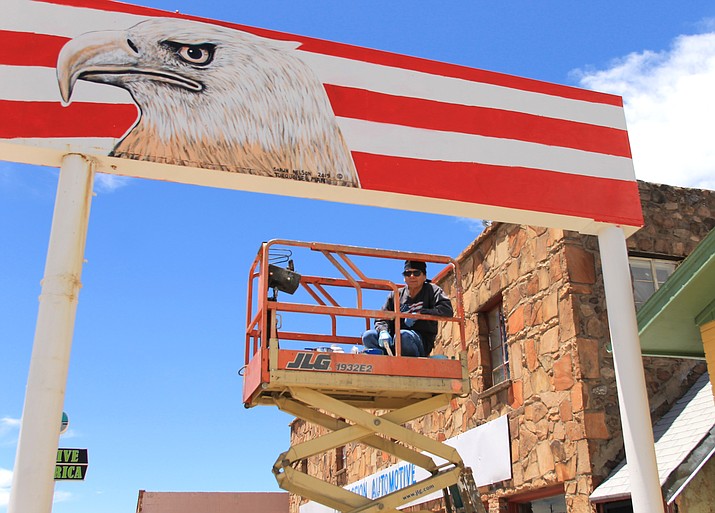 Navajo artist Shawn Nelson works on a sign on East Route 66 in Williams. Nelson’s artwork can be seen at several businesses in Williams. (Loretta Yerian/WGCN)

Navajo artist Shawn Nelson was commissioned to paint this mural on the south side of Mountain Man Mercantile in downtown Williams. (Loretta Yerian/WGCN)

WILLIAMS, Ariz. - Beautiful murals depicting much of what Williams has to offer have been popping up around town, and behind that work is someone who sees art as a process of honor and identity.

For the past few years, Navajo artist Shawn Nelson, “Turquoise Man,” has been traveling between his home of White Ruins on the Navajo Reservation and Los Angeles.

Nelson, who is Dibé lizhini (Black Sheep Clan) and Kinya’a a’anii (High Tower People), said much of his recent work is dedicated to the memory of New Mexico senator and Navajo Code Talker John Pinto. Pinto, who Nelson said was his uncle, recently passed away at the age of 94.

“I campaigned with him as much as I could,” Nelson said. “He would call me up and wanted signs made, stencils cut. That is one thing about him, he would say ‘never give up.’ That was kind of the story of himself.”

On his recent travels, Nelson stopped in Williams to eat at Miss Kitty’s Steakhouse and met owner John Moore.

“It was my half way point and I was having dinner and saw a sand painting on the wall,” Nelson said. “John introduced himself and I told him I was a sand painter.”

Moore purchased several of Nelson’s sand paintings, which can be seen at the restaurant, and Nelson was then approached by Mark Roggenbuck at Mountain Man Mercantile who commissioned him to paint a mural.

“He gave me an idea and I sketched it out and he said he liked it,” Nelson said.

The painted mural of a fly fisherman catching a rainbow trout took Nelson three days to complete. Upon completion he was hired by Jan Purdy to paint the garage doors and a sign at a new business on east Route 66.

“The idea is to look like something from the movie Cars,” Nelson said.

Nelson has been an artist for over 50 years. He specializes in natural Earth pigments to create fine art sand paintings that honor family and Navajo tradition.

He sold his first painting when he was 14 years old, and is largely self-taught, although he has taken courses at the University of New Mexico and The Bryman School of Arizona.

After initially pursuing a degree in the medical field, Nelson kept pushing himself with his artwork and began being commissioned to make artwork for corporate entities.

For two years, Nelson pursued the 5 foot by 8 foot sandpainting of a Native version of the Last Supper.

The mural has a group of Native Americans gathered together with halos hovering around all but one.

As word traveled about Nelson’s talent, he has been given numerous opportunities to create sand paintings for organizations and businesses throughout the Southwest. His art has been displayed in numerous art exhibits, and in places such as the Navajo Office of the President, the Rose Bowl Parade, Navajo National Museum and Resorts World Sentosa.

Nelson is currently a board member and Native American advisor with Clearinghouse CDFI in Lake Forest, California.

CDFI provides economic opportunities and improves the quality of life for lower-income individuals and communities through innovative and affordable financing that is unavailable in the conventional market.