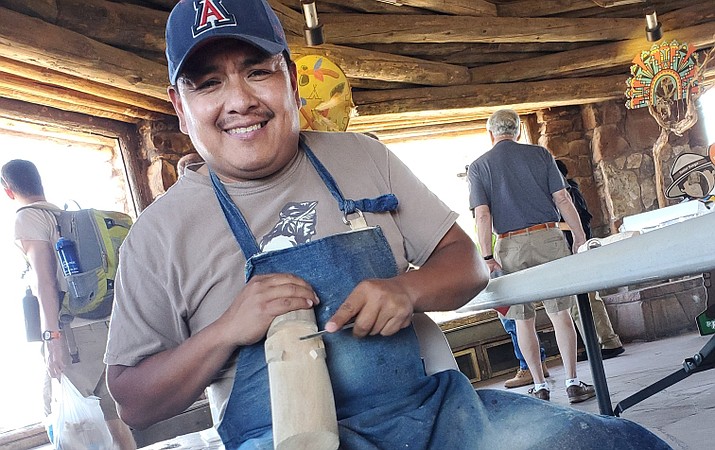 GRAND CANYON, Ariz. — Whether they have the head of a cow, the feathers of a hummingbird or the rich cotton hair of the snow maiden, Kachina carver Darance Mak’wesa Chimerica said all Kachina have one thing in common: they bring the promise of a good life for the humans they watch over.

A native of Hotevilla on Third Mesa, Chimerica has been carving Kachina dolls for more than 20 years. Initially, he learned the basics from his family but then began to develop his own style as he grew in the craft.

“I started picking up my own methods and techniques for carving,” he said. “Everyone has a unique style from carving to paints they use.” 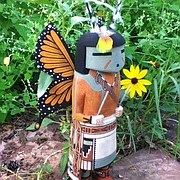 Kachina dolls represent the ancestral spirits that guide the Hopi people, as well as other tribes including the Navajo and most of the peoples of the New Mexico Pueblos. The spirits are often anthropomorphic animals and have unique attributes, whether it be for personal growth or to bring the bounty of certain seasons. There are more than 200 different Kachinas known by the Hopi to reside on Humphrey’s Peak.

“They represent different animals, plants and natural elements,” Chimerica said. “Birds or reptiles, they all have different meanings and what they represent.”

For instance, the snow maiden, with her natural cotton hair and blue, yellow and red garments, represents the snow and winter moisture needed to produce important crops in later months.

Aside from being teaching tools and toys for young girls, Kachinas are at the heart of some of the tribe’s religious ceremonies for half the year. During this time, kachina spirits visit tribal villages to dance and sing and bring rain for the upcoming harvest. The ceremonies are deeply religious to the Hopi and visitors are not permitted to view them.

Chimerica said the Hopi Kachinas are given to young girls as teaching tools to play with and learn from. 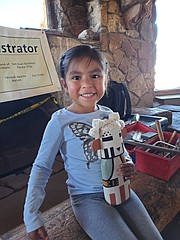 Chimerica's daughter holds a snow maiden Kachina doll. The dolls are given to young Hopi girls as toys and teaching tools and become more elaborate as the child ages. (Erin Ford/WGCN)

“In the earlier days, they would play with them like Barbie dolls,” he said. “For the first four years of their lives, they will get the flat dolls, then when they get older, they’ll get the more elaborate (Kachinas) with the arms and legs.”

Chimerica said while there are many different Kachinas that bring different attributes, they all have one thing in common: they represent life. A kachina doll hanging in the home brings a good, long life to all humans.

Other Kachinas, like a custom-ordered badger doll Chimerica is currently working on, bring healing energy to a home and its inhabitants and are believed to clear negative energy from the home and cure illnesses within.

Traditionally, Kachina dolls are carved from the root of the cottonwood tree. Chimerica said he gathers it himself from areas near Moab, Utah, or when kayaking along the Colorado River. He even gathers his own pigments for paints locally around the Hopi reservation, and travels as far as Colorado and Santa Fe, New Mexico to scrape various minerals from cliff walls. A full-sized doll takes him about three days from start to finish, and he carves and paints the entire thing by hand.

The Kachinas take many different forms, and each have their own attributes to bestow. The wolf, for instance, represents the hunter and the ability to capture game animals, while the buffalo is known as a great spiritual protector and the crow maiden watches over children as they play.