Coconino County responds to 1,239 calls over July 4 holiday and weekend 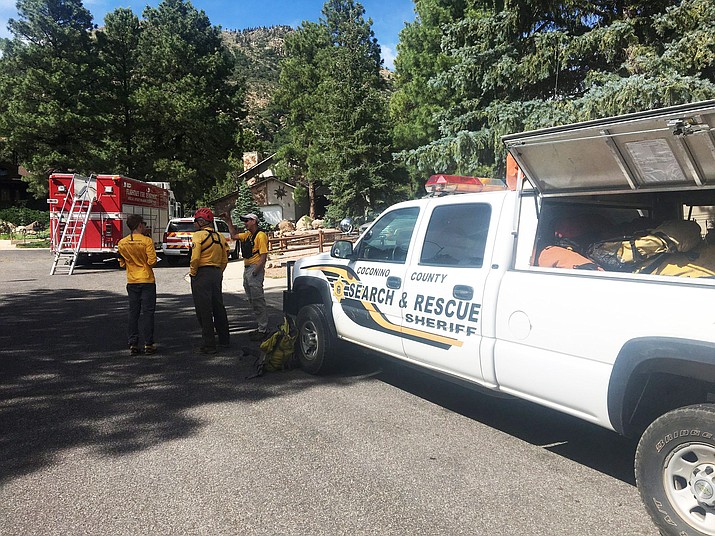 From July 3-7, Coconino County Sheriff’s Office responded to 1,239 total calls for service. The department said this number is similar to that of the previous non-holiday period. (Photo/CCSO)

According to CCSO, this number is similar to that of the previous non-holiday period, however, there was a significant increase in the number of activities stemming from outdoor recreation in Northern Arizona.

Traffic / Moving Vehicle Stops: Deputies throughout the county conducted 133 traffic stops during the extended holiday weekend, resulting in 3 arrests/bookings, 26 moving vehicle violation citations (4 of these were boating related); 4 repair orders, 16 written warnings, and 142 verbal warnings. Many of the traffic stops were for off road vehicle traffic issues.

Lake Powell: Deputies at Lake Powell made contact with 37 vessels to address boat safety issues. During the contacts with boaters, deputies not only checked for impaired driving but also checked to make sure the right safety equipment was onboard and accessible.

Sheriff’s Deputies responded to several calls for missing or overdue individuals ranging in age from youth to adults. During the initial response of these types of calls, information is gathered regarding the description of the missing person, circumstances, any medical conditions, and what type of food, water, or other equipment they may have with them. Deputies immediately begin to search the area in attempt to locate the persons. Search and Rescue is advised if further resources are needed. In addition to the below listed rescues, there were several calls related to missing persons or search and rescue that were resolved either by the people on scene or by the original responding deputy without the need for further resources.

July 3-4: Search and Rescue assisted Page Water Patrol with locating a stranded motorist whose vehicle became stuck in the sand on the Paria Plateau.

Coconino County Search and Rescue assisted Page Patrol with locating a stranded motorist whose vehicle became stuck in the sand on the Paria Plateau July 3. (Photo/CCSO)

On the afternoon of July 3, 911 calls were received by Kane County Sheriff’s Office and the Page Police Department from the motorist; however, no GPS location information was received with the call. The caller indicated that she was trying to reach White Pocket when she became stuck. Calls to the stranded motorist were not able to be completed in order to gather additional information. Page Patrol units searched the common routes to White Pocket from the House Rock Valley Road. When the vehicle was not located, Page Patrol asked for assistance from the SAR Coordinator. Additional research was completed with cellular companies maintaining cell towers in the area in an attempt to determine an approximate location for where the 911 call came from.

Early in the morning of July 4, an Arizona DPS Air Rescue helicopter was launched from Kingman to assist in searching the area for the vehicle. At approximately 7:30 a.m. the DPS helicopter located the vehicle and the two occupants. The occupants, who were from Spain, were flown to the Marble Canyon Airport where deputies assisted them in arranging for a tow truck.

On July 4 at approximately 3 p.m. the SAR unit was requested to assist in the search for a 70-year old female from California who was overdue from a short hike in Forest Lakes. The resident deputy in Forest Lakes organized local resources including U.S. Forest Service, Arizona Game and Fish and Forest Lakes Fire District to begin the search while the Search and Rescue Team was enroute. An Arizona DPS Air Rescue helicopter from Phoenix was requested to assist with the search for the missing hiker. The hiker was located a short distance away from the residence where she was staying and was reunited with family members.

On July 4 at approximately 8:45 p.m. SAR was requested to assist with a search for three lost hikers on the Humphrey’s Peak Trail. The hikers indicated that they had lost the trail during their descent from the summit. Based upon location information received from their 911 call, resources were deployed to assist them in getting back on the trail. Prior to making contact with the hikers, they were able to get back on the trail with the help of other hikers in the area.

On July 4 at approximately 11 p.m. SAR was requested to assist with a search for a missing member of a group home which had been on an outing to watch fireworks at Twin Arrows.

On July 5 at approximately 1:30 p.m. a SAR helicopter rescue specialist was requested to assist the Arizona DPS Air Rescue helicopter based in Flagstaff. The request was for a mission to assist the Washington County Sheriff’s Office in Utah with a helicopter technical rescue of a hiker with a cardiac condition in the Pine Valley Mountain Wilderness. A short-haul rescue was conducted, and the hiker was transferred to an ambulance for transport to a local hospital.

On July 6 around 6:30 p.m. the SAR unit responded along with Summit Fire District and Guardian Medical Transport to the Humphrey’s Peak Trail to assist a sick hiker.

The hiker was approximately three miles from the trail head and was experiencing symptoms consistent with acute mountain sickness. Rescuers were deployed to the Humphrey’s Trail near the top of the Humphrey’s Peak chairlift using UTVs from Arizona Snowbowl and the Sheriff’s Office. Rescuers made contact with the hiker on the trail at approximately 8 p.m. and provided medical care and then evacuated the hiker to the trail head.

On July 7 at approximately 2 p.m. CCSO received a call about a subject stuck on a cliff on Mount Elden. According to the reporting party, the subject stated that he had been there for two days, was out of water and food, and could not get down. 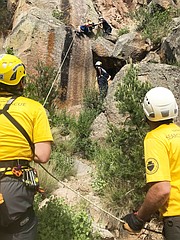 On July 7, CCSO received a call about a subject stuck on a cliff on Mount Elden for a subject who stated that he had been there for two days, was out of water and food, and could not get down. (Photo/CCSO)

The Search and Rescue Mountain Rescue Team responded along with the Flagstaff Fire Department. The combined rescue team hiked into the area and met with the reporting party who pointed out the location of the stranded subject. A plan was made to climb up to the subject and then secure him in a harness and helmet and lower him to the base of the cliff using a rope and then escort him to the trail head. The subject was transported by Guardian Medical Transport to Flagstaff Medical Center for evaluation. The subject stated that he had hiked on the Elden Look Out trail to the summit and then descended the canyon on the south side of Mount Elden. In an attempt to climb out of the canyon to return to where he started, he became stranded on a cliff. The subject had attempted to yell for help but no one heard him until Sunday afternoon, July 6.

Deaths: Investigators responded to four deaths including two that are being investigated as suicides and two natural deaths. No additional information is available at this time.

Fire related: Deputies responded to several fire related calls, including abandoned campfires, concerns over fireworks and reports of smoke. On July 4, deputies and fire crews responded to the Chimney Springs Fire in the Schultz Pass area.