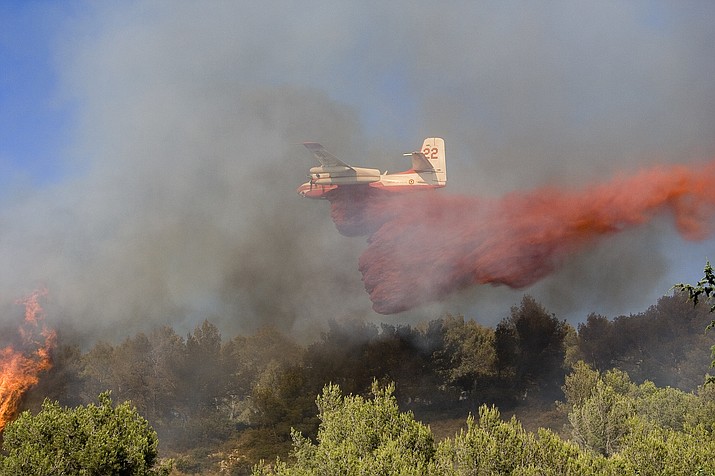 Fire retardant is dyed red to make the line visible when its dropped from air tankers like this DC-10. The mix of water and chemicals is used to delay combustion and slow the spread of flames. (stock photo)

PHOENIX — Fire retardant is one tool in battling wildfires, including the recent Woodbury Fire east of Mesa. But is the mixture of water and chemicals, including thickening agents, a danger to people and the environment?

Dolores Garcia, a spokeswoman with the Bureau of Land Management office in Phoenix, said retardant is crucial in areas where it’s difficult to deploy firefighters quickly.

“We utilize it to help slow the progress, especially in areas that may be threatened, such as our wildland-urban interface,” Garcia said.

Wildland-urban interfaces are transitional areas where homes are built near land prone to fires. Being on the edge of the wildlands, these areas require quick responses to maintain safety.

The retardant is dyed red to make the line visible when dropped from tanker planes. Garcia said there are plenty of factors to consider when dropping the retardant, such as proximity to rivers and streams.

The size of the air tanker used is determined by the target area to be covered.

It can take 15 to 20 minutes to drop retardant. The process involves sending out a lead plane to evaluate the situation, doing a practice run and releasing a small line of smoke across the area. The tanker then drops the retardant along that smoke line.

The substance does have its opponents, including the nonprofit group Forest Service Employees for Environmental Ethics in Eugene, Oregon. The organization has filed lawsuits in the past over the issue.

Its members are current and former Forest Service employees, other government resource managers and environmental activists. The organization’s stated focus is to protect national forests and to reform the U.S. Forest Service by advocating environmental ethics, educating citizens, and defending whistleblowers, according to its website.

“We have two concerns when it comes to fire retardant,” Stahl said. “One is that it is very dangerous for the pilots that deliver it. The second is that it doesn’t work. It doesn’t actually make a difference in the final outcome of the fires.”

Garcia acknowledged that fire retardant can potentially have adverse effects.

“There may be areas that may have some immediate sensitivity to some of the chemicals in there, mostly ammonium sulfate salts,” Garcia said. “But the long-term effect of wildfire through an area may be more detrimental.”

Ammonium sulfate, used as a dough strengthener and fertilizer for alkaline soils, is generally recognized as safe by the U.S. Food & Drug Administration.

The fertilizing nature of fire retardant is what concerns the Forest Service Employees for Environmental Ethics.

“That’s great if you want to grow corn and soybeans,” Stahl said. “But if you’re trying to protect native species’ habitats, it’s not good to change the habitat.”

The Forest Service has improved its protocols for using fire retardant in recent years, including that retardant can’t be dropped within a certain distance of a waterway. The change came after a U.S. District Court in Montana found in 2010 that the agency’s environmental review of the practice violated the National Environmental Policy Act.