Soccer gets a green light at Williams Middle School 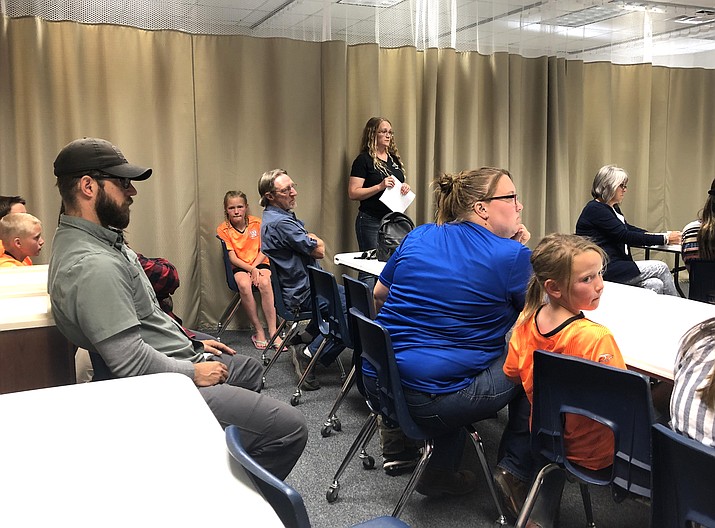 Susie Daly presents to the Williams Unified School District Governing Board June 28. Daly and other coaches, players and parents requested the board approve soccer as a middle school sports program. (Wendy Howell/WGCN)

WILLIAMS, Ariz. — Youth soccer in Williams continues to grow, and the Williams Unified School District Board acknowledged that June 26 when they approved soccer as a new competitive sports program at Williams Elementary-Middle School.

Several players, coaches and parents attended the regular board meeting Wednesday night to lend support for the program. Most of those families have been involved with the AYSO (American Youth Soccer Program) for many years.

Susie Daly, who has facilitated the AYSO program in Williams for the past few years, gave a short presentation to the board to reinstate the program.

“It would be really neat to get soccer back into the school level,” Daly said. “We’ve had a lot of parents who have expressed interest during the school season.”

Daly said there are also students who can’t play in the summer, but would like to play during the school year. Some children can’t participate in summer soccer because of transportation issues and costs.

Daly said AYSO has offered to work with WUSD to help facilitate the program including paying for uniforms the first year.

“They want to see soccer continue to grow in Williams,” she said.

Echeverria said in the past the concern has been football and soccer competing for athletes since they are both fall sports.

“But I doubt there are very many kids that are playing AYSO soccer that are interested in football because youth football is at the same time as AYSO,” he said.

The program has games every Saturday and is co-ed.

Board member Herman Nixon said the district should look at the program at both the elementary and high school levels.

“I would say if we start this at the elementary level, we need to take a look at the high school level,” he said. “We need to know where this is headed.”

Echeverria said at the high school level, Ash Fork, Chino Valley and Basis have soccer programs and Williams could probably be in the same region.

“It would work out pretty well at the high school level for travel,” he said.

Echeverria said the program will need to share the football field and WEMS for now, but he hopes the district and community could help establish a new field at the high school.

“We do have this big area behind the softball field here,” he said. “And it would be nice to get district funds or donations to have someone come in and blade that and get it leveled out and put in irrigation to make a field.”

Echeverria estimates the cost at $2,000 for the middle school program this year, with additional costs in the future for nets, flags, paint, balls and other equipment.

Daly said she believes there are several businesses and community members who would be willing to assist in financially support the program.