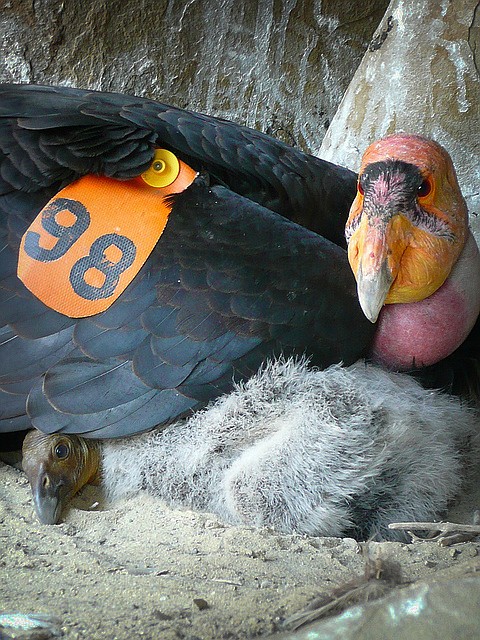 The nestling, confirmed by a biologist with The Peregrine Fund, is the first confirmed hatching in the wild in Arizona this breeding season. The organization said in a press release the young bird is believed to have hatched around April 23 to condors 266M (male) and 296F (female).

The historical California Condor population declined to just 22 birds in the 1980s when the greater California Condor Recovery Program was initiated to save the species from extinction. Today the birds can be seen above Arizona, Utah, California and Mexico.

California Condor populations have slowly increased since the first captive-reared birds were released into the wild at Vermilion Cliffs National Monument in 1996. As of December 2018, there were 488 total condors worldwide, with 166 in captivity and 312 in the wild, more than 88 of which can be seen soaring above in Arizona and Utah skies.

With a wingspan of up to 9.5 feet, California Condors are the largest flying land bird in North America and are opportunistic scavengers that utilize thermal updrafts to help them soar and glide up to 50 mph. They can also travel more than 100 miles per day in search of food.

Condors can live up to 60 years in the wild, but they have low reproductive rates and only reach maturity after the age of six or seven. A pair of condors mates for life, and will lay a single egg each reproductive cycle. While they don’t build conventional nests of branches and organic material like other raptors, they do establish nest sites in caves or on rock ledges. The egg is laid on the bare ledge and will hatch after about two months. While condors generally nest in areas that are difficult or impossible for humans to reach without skill and equipment, some predators such as bobcats and mountain lions can reach the nest. Golden Eagles can also prey on nestlings.

Young condors fledge — take their first flight — at five to six months of age, but may stay in the nesting area for up to a year.

Like other raptors and scavengers, one of the biggest threats to the California Condor is lead poisoning. Condors are scavengers that often feed on gut piles left behind by hunters and become poisoned by the lead that leeches out of bullets. The lead builds up in their bones and organs and eventually causes their deaths.

The Arizona-Utah recovery effort is a cooperative program by federal, state and private partners, including The Peregrine Fund, Arizona Game and Fish Department, U.S. Fish and Wildlife Service, the Bureau of Land Management’s Vermilion Cliffs National Monument, Grand Canyon and Zion national parks, Utah Division of Wildlife Resources and Kaibab and Dixie national forests among many other supporting groups and individuals.