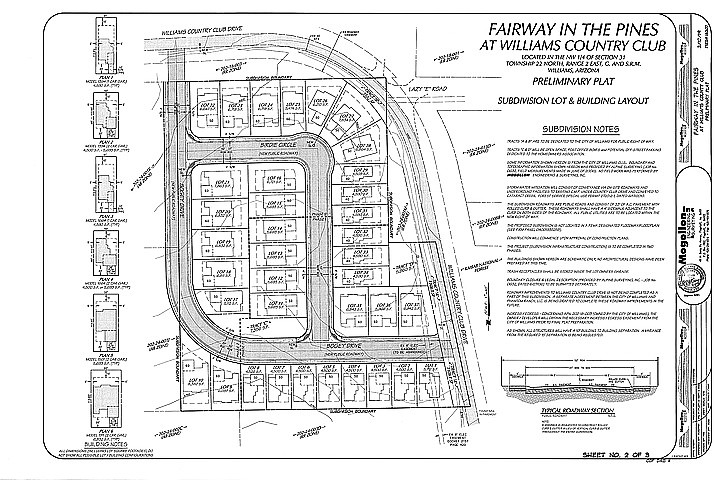 Approximately 45 people attended the meeting, with several speaking out regarding concerns with builder Steve Iverson’s Fairway in the Pines development.

The residents, some of whom had attended the previous two Williams Planning and Zoning meetings, voiced concerns about the design of the development, the conflict to a wildlife corridor, the property values with a surplus of homes and the lack of space and activities for youth.

Other residents said the development wasn’t large enough to handle 35 homes and were concerned about the availability of water and impact on the sewage system.

Mark Hanson, an attorney with Ledbetter Law Firm in Cottonwood who represented Iverson, addressed the crowd. He said Iverson purchased the property with R-2 zoning, which is higher density with the potential for multi-family homes such as duplexes.

“If we are planning to put in duplexes or cram as many lots as possible in there, we would be coming here seeking 44-45 lots,” he said. “Even as this process has gone through, we have reduced the lots to reduce the density to make sure we are leaving as light of a footprint as reasonably possible. We want to be responsive to the towns concerns, if we were solely doing it for profit we’d be putting in 44 or 45 homes in there.”

Joanna Plumber, a resident of Highland Meadows, asked why the city would consider a variance change for the development.

Councilman Don Dent asked Iverson what would happen if the variance of five-foot setbacks wasn’t approved.

Iverson said he would continue to lose more lots within the subdivision if he wasn’t approved for the five-foot setbacks.

“At that point I would look at going back to higher density duplexes where I could do zero setbacks almost, and go back to my 45 units that were already approved originally by the preliminary plat of the previous owner,” he said. “But I don’t want this to be a financial decision, I live there. This is my neighborhood too.”

According to Williams Chief Building Inspector Tim Pettit, a property can be seized by the city if it is in the best interest of the city, but rezoning can only be requested by the property owner.

“As far as changing the zoning, the city cannot because it does more than change the zoning,” Pettit said. “What’s attached to zoning is property values and if you change it from something that is a higher density to a lower density you lose value.”

Pettit said the property for the Fairway in the Pines development was rezoned around 2007. He believes it was originally zone R-R, which is generic zoning for rural property that can be rezoned as needed.

Although Pettit wasn’t part of the rezoning, he said the city archives revealed several meetings about it.

“The rezoning was a big deal,” he said, “There were two people opposed to it and about 10 who like it.”

Pettit said those in favor wanted to support thedevelopment of a residential setting around the golf course.