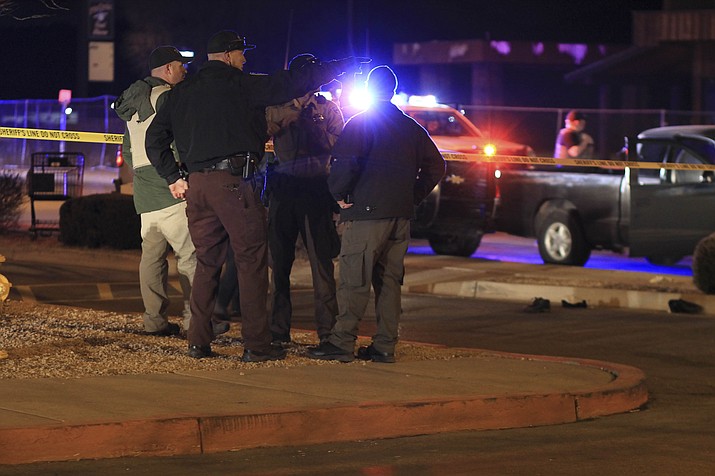 Law enforcement officers investigate the scene after a man barricaded himself inside a vehicle on Route 66 in Williams Jan. 30.

Law enforcement officers investigate the scene following a seven-hour standoff with a man barricaded in a vehicle.

Coconino County Sheriff's Office has taken Williams resident Matthew Solan into custody near the Safeway in Williams after Solan shot himself in his vehicle. Solan was arrested by officers and transported by Life Line Ambulance to Flagstaff Medical Center. Although weapons were drawn, officers did not fire at the suspect and no officers were injured in the incident.

According to CCSO Lieutenant Brian Tozer, Solan voluntarily came out of his vehicle after the shots were fired.

“The suspect was taken into custody,” Brian Tozer said. “He has a self-inflicted gunshot wound to the leg. He’s going to be transported to Flagstaff Medical Center right now. Once he is released he will be taken into custody and to the jail. Nobody else was injured.”

Tozer said officers had been looking for Solan who was wanted for questioning in an incident that occurred Jan. 29. Tozer said two other occupants and a dog were in the vehicle when Solan was contacted by deputies.

The occupants complied with officers and were removed from the vehicle, while Solan refused to exit the vehicle. Tozer did not believe the two unidentified occupants were involved with the Jan. 29 incident. Tozer did not disclose details of the previous day’s incident.

“It happened last night and then we located him here, in town,” Tozer said.

Tozer said officers were speaking to Solan during the stand-off.

“He was making demands, things like that,” Tozer said. “We are here to help people not hurt them.”

The dog was unharmed and collected by Williams Animal Control.

Officers remain on scene as they complete their investigation. Safeway has reopened, although the north entrance to the parking lot remains closed.

“We’ve got an active crime scene down here that we’re working,” said Williams Police Chief Herman Nixon. “It will probably be cleared up in a couple hours and everything will go back to normal.”

Nixon said Williams Police Department initially responded to help apprehend the suspect, however they turned the scene over to CCSO and the tactical team when the suspect refused to exit the vehicle. Nixon said Solan was in possession of a handgun.

“He was pointing the gun at his head,” Nixon said. “Once it went to a barricade situation with a (suicidal) suspect with a weapon we backed off and let SWAT come in and do their job”

Dozens of bystanders stayed at the scene that began around 11:30 a.m. Bystanders said they heard shots fired and saw Solan quickly exit the vehicle around 6:30 p.m.

Nixon said Solan has a criminal history with law enforcement in Williams, and other locations.

The investigation is ongoing at this time. Visit Williams News for follow-up story.