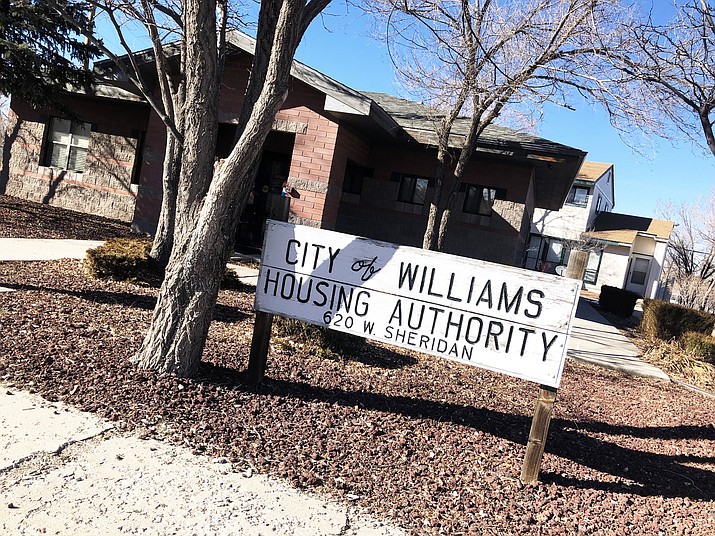 The City of Williams Housing Authority felt the impacts of the recent government shutdown. (Wendy Howell/WGCN)

WILLIAMS, Ariz. — Many people expressed a sigh of relief Jan. 25 after President Donald Trump agreed to reopen the government for three weeks, and Williams Housing Authority director Guy Mikkelsen was definitely among them.

On Jan. 31, Mikkelsen said the Williams Housing Authority was set to run out of money for the Housing Choice Voucher Program, or Section 8, by March 1. Funds to continue operating the city’s low-income apartments was also set to end.

“I am going to be using my reserve funds for February payments and if it (went) into March, we (were) going to be out of funding,” Mikkelsen said.

Housing advocates around the country had warned Washington that a prolonged shutdown would cause funding to dry up for housing programs that support the most vulnerable populations — including seniors, veterans, the disabled and children.

Mikkelsen said locally 65 families made up of 175 family members — including 84 kids — would be impacted by the lack of funding for the program.

“It’s a pretty sizable amount of families that receive this financial assistance,” he said.

Along with rental assistance, Mikkelsen also assists families with utilities.

“We send direct payments to keep people’s electric, water, garbage and other things going,” he said.

Housing administrators had begun sending letters to landlords and residents to prepare for the potential loss of funds, Mikkelsen said.

He said almost all housing directors were in the same situation, where February was affordable using reserves, but after that March would have been unpaid rent nationwide.

Now that the government has fully reopened, Mikkelsen is waiting for the money to return.

A budget in three weeks?

Submitting to mounting pressure amid growing disruption, President Donald Trump signed a bill to reopen the government for three weeks, backing down from his demand that Congress give him money for his border wall before federal agencies get back to work.

Standing alone in the Rose Garden, Trump said he would sign legislation funding shuttered agencies until Feb. 15 and try again to persuade lawmakers to finance his long-sought wall. The deal he reached with congressional leaders contains no new money for the wall but ends the longest shutdown in U.S. history.

First the Senate, then the House swiftly and unanimously approved the deal. Late Jan. 25, Trump signed it into law. The administration asked federal department heads to reopen offices in a prompt and orderly manner and said furloughed employees can return to work.

Trump’s retreat came in the 35th day of the partial shutdown as intensifying delays at the nation’s airports and another missed payday for hundreds of thousands of federal workers brought new urgency to efforts to resolve the standoff.

“This was in no way a concession,” Trump said in a tweet, fending off critics who wanted him to keep fighting. “It was taking care of millions of people who were getting badly hurt by the Shutdown with the understanding that in 21 days, if no deal is done, it’s off to the races!”

The shutdown ended as Democratic leaders had insisted it must — reopen the government first, then talk border security.

“The president thought he could crack Democrats, and he didn’t, and I hope it’s a lesson for him,” said Senate Democratic leader, Chuck Schumer.

House Speaker Nancy Pelosi said of her members: “Our unity is our power. And that is what maybe the president underestimated.”

Trump still made the case for a border wall and maintained he might again shut down the government over it. Yet, as negotiations restart, Trump enters them from a weakened position. A strong majority of Americans blamed him for the standoff and rejected his arguments for a border wall, recent polls show.

“If we don’t get a fair deal from Congress, the government will either shut down on Feb. 15, again, or I will use the powers afforded to me under the laws and Constitution of the United States to address this emergency,” Trump said.